1941
33 Italian Fascist Party leaders are dispatched to bolster morale on the Albanian front.

Hitler reviews the plans for Operation ‘Barbarossa’, as German intelligence estimates that 155 Red Army divisions are deployed in western Russia against just 116 German and Axis divisions. The starting date is again confirmed as the 15th May 1941.

The British ‘Northern Force’ bumps into the Italian defenses at Keren, but fail to crack them open. General Platt decides he must build up his forces for a major assault. 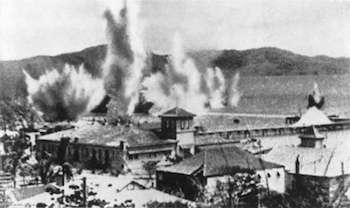 President Quezon of the Philippines proposes to President Roosevelt that his country should be granted total independence from the USA so that it could declare itself neutral, but Roosevelt dismisses this idea. General MacArthur warns Roosevelt that the Bataan garrison has suffered over 50 per cent casualties and it was ‘near done’. MacArthur was given permission by Roosevelt to surrender Filipino, but not US troops who were to fight until the end.

1944
An attempt to breakout of the Anzio Beachhead ends after an advance of just three miles in three days. The German begin their first counterattacks against Anzio.

The Japanese open their counter-offensive against the British in Arakan, Burma.

The United States shells the Japanese homeland for the first time at Kurile Islands.

The US 8th Air Force, with 937 bombers and 613 fighters, carries out the heaviest attack to date against Berlin which levels large areas of the city and kills more than 25,000 civilians.