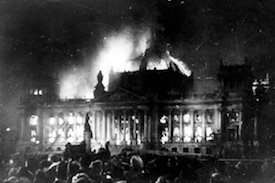 1933
The burning down of the Reichstag building in Berlin gives the Nazis the opportunity to suspend personal liberty with increased power.

1941
The first encounter of the Afrika Korps and the British forces.

1942
The Battle of the Java Sea begins and continues for three days, during which the Allies, under the command of the Dutch Admiral, Karel  Doorman lose five cruisers and six destroyers, while the Japanese lose just 4 transports.

British Commandos raid a German radar station at Bruneval on the French coast.

The Seattle school board accepts forced resignation of Japanese-American teachers.

1943
Jews working in Berlin armaments industry are sent to Auschwitz.

1944
About 60,000 Japanese are reported to be trapped in New Britain and New Ireland, in the South West Pacific.

The United States issues plastic tokens to make change for ration stamps—blue for processed foods, red for meats and fats.

1945
SHAEF reports that spectacular gains by the U.S. First and Ninth Armies on the Cologne Plain have been made.

Under Russian pressure, the Romanian King, Michael I is forced to appoint a Communist government.

The US 8th Air Force launches another heavy attack against Berlin which devastates the center of the city.

U.S. Marines land on Verde Island, to the Southeast of Manila.

Syria and Lebanon join many other nations in last-minute declarations of war on Germany and Japan—all who join Allies before March 1 will be invited to the upcoming United Nations conference.