1941
The 2-engine Manchester bomber is used for the first time during an RAF raid against Brest.

Reconnaissance elements of the German 5th Light Division clash with British forces for the first time in Africa, at Nofilia near El Agheila.

1942
Parliament begins a two day debate on the conduct of the war.

1944
Hitler speaks to a closed door meeting of Nazi Party leaders and activists at the Hofbrauhaus in Munich on the occasion of the anniversary of the proclamation of the Party Program in 1920. Hitler refuses Goebbels requests that the speech be broadcast and even prohibits any mention of it in the newspapers.

‘Big Week’ continues with a co-ordinated RAF and USAAF attacks on the Schweinfurt ball-bearing factory.

1945
A haggard and aged-looking Hitler addresses his Gauleiters and Reichsleiters for what proves to be the last time in the Reich Chancellery in Berlin on the occasion of the 25th anniversary of the proclamation of the Nazi Party program. Perhaps sensitive to the likelihood of public scepticism and derision, he refuses to allow the speech to be broadcast or even reported to the public at large.

A German counter attack wipes out the Russian Hron bridgehead over the Danube to the northwest of Budapest. 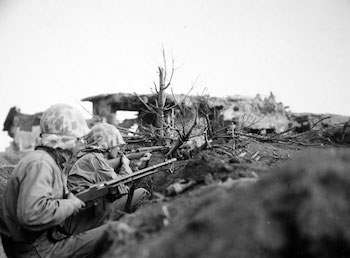 German U-boats sink 8 ships and 2 destroyers from a convoy bound for the Russian port of Murmansk.

Egyptian Prime Minister Ahmed Maher Pasha declares war on the Axis and is immediately assassinated in the parliament chamber.