1941
Parts of the Australian 8th Division arrive in Singapore.

1943
In the wake of the Stalingrad disaster, Dr. Goebbels, speaking before an enthusiastic audience of soldiers and civilians in Berlin, announces the implementation of “total war” which, for the first time, mandates the employment of German women in the war effort. 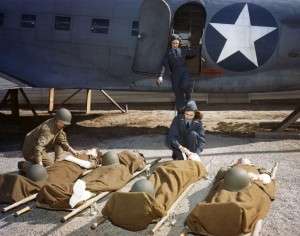 A B-29 Superfortress bomber crashes in test flight into a meat-packing plant in Seattle, 33 killed

Nazis arrest the ringleaders of the White Rose resistance group at the University of Munich.

Madame Chiang Kai-shek addresses joint session of Congress, the first woman and the first Chinese to do so

1944
Mosquitoes, escorted by Typhoon fighter-bombers, launch a daylight low-level attack on the prison at Amiens, France, in order release French patriots; 258 prisoners escaped (including many criminals), but 102 inmates were killed.

Renewed allied attacks at Cassino are broken off. The Germans make further gains at Anzio but are repulsed by allied artillery and warships.

The Red Army recaptures Staraya Russa, as Army Group North falls back to the line Narva-Pleskau-Oposhka.

The Germans conduct their heaviest night raid on London since 1941 as the Luftwaffe intensifies the ‘Little Blitz’.

The Cruiser Penelope is sunk by U-410 off Naples and earns the distinction of being the last British cruiser to be lost in the war.

1945
The Red Army encircles Graudenz on the Vistula. Troops of the 11th SS Army are brought to a stand still by stiffening Soviet resistance to ‘Operation Sonnenwende’.

A Russian torpedo hits the ex-’Strength through Joy’ Nazi cruise liner leaving Danzig for Denmark with 5,000 refugees and 3,800 U-boat personnel on board. Only 1,000 are reported as saved.

US Army Air Forces Band (under Maj. Glenn Miller before his death) performs at Paris Opera House, the first time popular music was performed at this venue.