Hanover is bombed by the RAF.

Three Stirlings of No. 7 Sqn carry out the first RAF four-engined bomber attack against oil depots in Rotterdam.

1942
The Channel Dash (Operation Cerberus). At 23.00 hours, Admiral Ciliax orders his squadron, which includes the battleships Scharnhorst and Gneisenau and the cruiser Prinz Eugen, to leave Brest and dash through the English Channel for the safety of Kiel in Germany.
[youtube width=”640″ height=”385″ video_id=”MASITpTRomA”]

The US Army occupies Aruba, Bonaire, and Curaçao in Dutch West Indies with permission from Free Dutch.

US Army begins construction on Camp Stoneman in Pittsburg, California.

US War Production Board takes DuPont’s supply of nylon.

Americans troops at Cassino are relieved by Indian and New Zealand forces. The allies are pushed back to final defence line at Anzio.

The Australians take Rooke Island between Huon and New Britain.

1945
The Red Army the encirclement of the fortress city of Kastrin on the Oder. 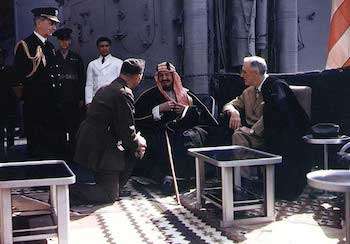 On way home from Yalta, Roosevelt meets with kings Farouk of Egypt, Haile Selassie of Ethiopia, and Ibn Saud of Saudi Arabia, but is unable to convince them to allow Jewish settlement in Palestine.