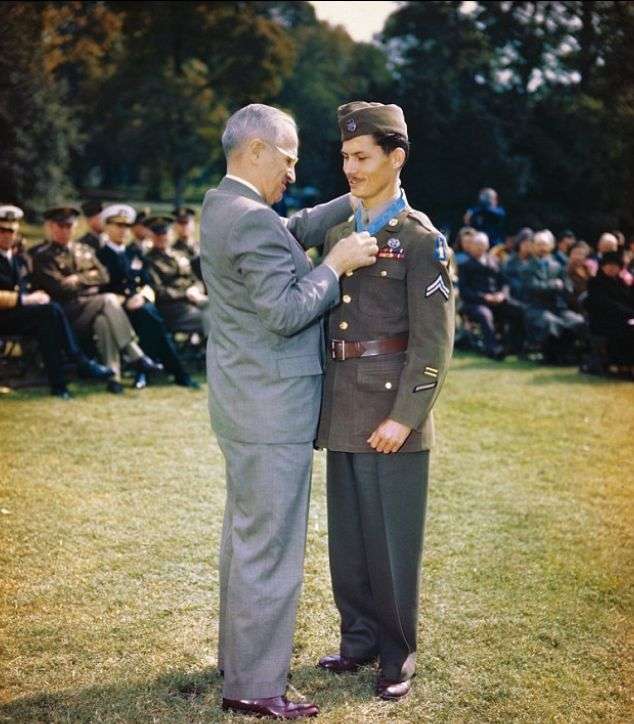 Desmond Thomas Doss was born in Lynchburg, Virginia in 1919. During the Great Depression, he stopped attending school after the ninth grade to help out his family, working in a shipyard when WWII broke out. He could have gotten a deferment due to his employment, but he wanted to serve his country and answered the draft. As a deeply religious Seventh-day Adventist, he always did whatever he could to help other people. On one occasion, he heard on the radio that a women suffered a traffic accident nearby and urgently needed blood. Doss walked three miles to the hospital to donate some of his, then walked another three miles back home once he was done. He did the same thing again two days later after another call went out on the radio. 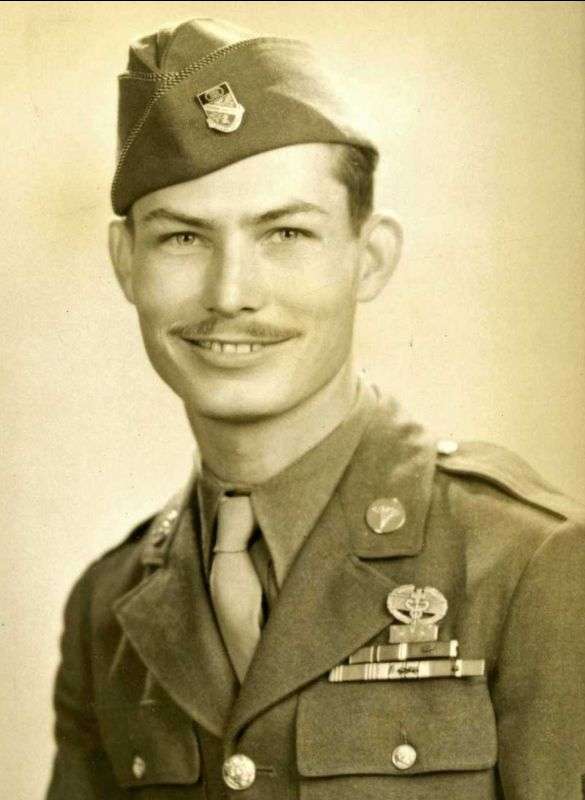 He met Richmond native fellow Adventist nurse Dorothy Schutte at church when she was travelling through Lynchburg selling Adventist books. In her own words, she married him because “He was a good Christian and I figured he would help me go to Heaven. … He appreciated me because I’ve never kissed any other men. He was the first one I ever kissed.” They married four months after he was drafted, before going on active duty. Contrarily to the film, Doss did not miss his wedding because he was denied a pass. 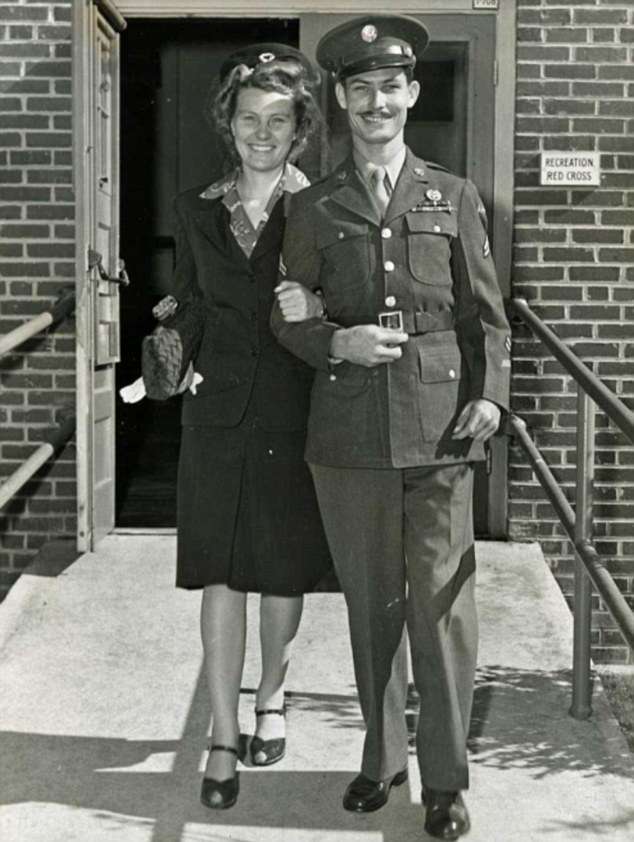 During training at Fort Jackson, South Carolina with the 77th Infantry Division, Doss made heavy waves by refusing to kill enemy soldiers, to work on Saturdays or to use a weapon. He wouldn’t even carry one, since, as he said, “I knew if I ever once compromised, I was gonna be in trouble, because if you can compromise once, you can compromise again.” Like it is shown in the movie, this made him the target of his comrades and superiors. He became a medic assigned to 2nd Platoon, B Company, 1st Battalion, 307th Infantry, 77th Infantry Division.

Doss was eventually deployed to the Pacific and saw combat on Guam, where he was awarded the Bronze Star for aiding soldiers under fire, and at Leyte in the Philippines, before finding himself on Okinawa. The film depicts his heroism in 1945 at the Maeda Escarpment, nicknamed Hacksaw Ridge as soldiers would be literally cut in two by machinegun fire from numerous fortified Japanese positions. Here Doss single-handedly dragged 75 wounded soldiers to the edge of the cliff and lowered them to safety with a cargo net. What the movie doesn’t show is that Doss was one of the three volunteers who climbed up the cliff first and lowered the nets for the others.

His heroic actions didn’t stop at the ridge. A few days later, on the same escarpment, he crawled through heavy fire to rescue a wounded man 200 yards ahead of the American lines. Then two days after that, he advanced within eight yards of a Japanese-occupied cave to treat and evacuate four others. On May 21, 1945 he was seriously wounded in the leg by an exploding grenade that embedded 17 pieces of shrapnel in him. He attended his own wounds and waited 5 hours for litter bearers to reach him. On the way back, he saw a man with more serious wounds than him, so he instructed the bearers to take the other soldier in his place. While he was waiting for the men to come back – another element not shown in the film – a Japanese sniper shot him, shattering his left arm. Desmond Doss became the first and only conscientious objector to be awarded the Congressional Medal of Honor for “conspicuous gallantry and intrepidity in action above and beyond the call of duty” in World War II. 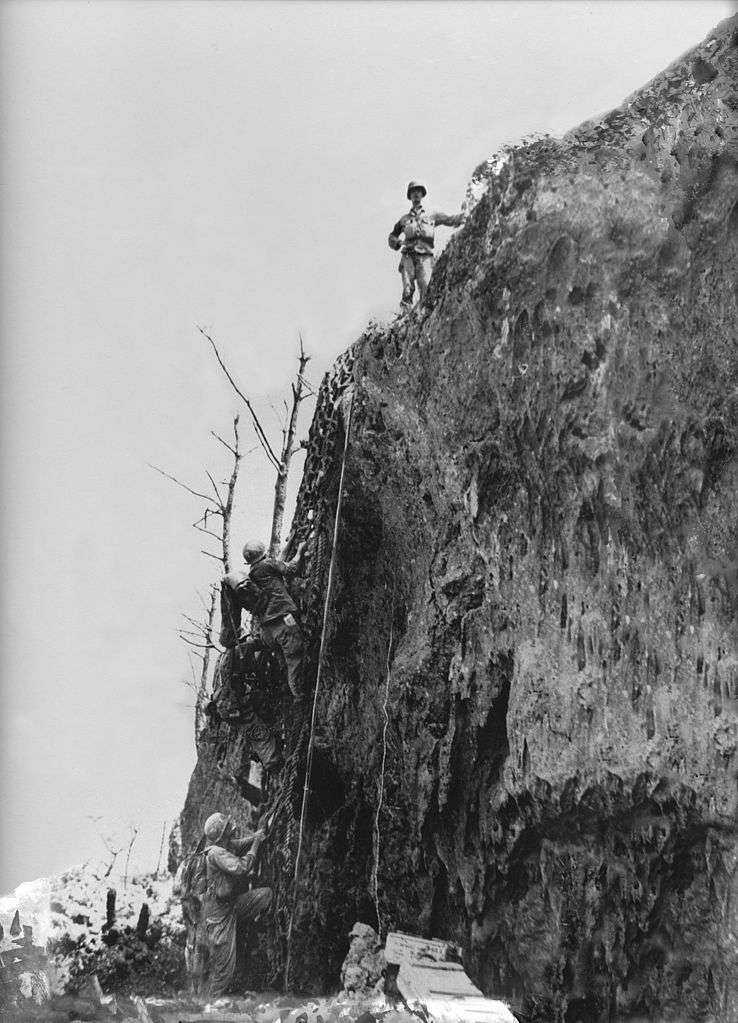 Because of his injuries, Doss was evacuated on May 21, 1945. A year later, he was diagnosed with tuberculosis that he contracted while serving on Leyte. The disease cost him a lung and five ribs, which, along with his wounds, left him 90% disabled. After his honorable discharge in August of 1951, he spent the rest of his life farming and working various part-time jobs such as cabinetmaking, door-to-door sales and maintenance as his health allowed. By 1976 he was entirely deaf, possibly due to an antibiotic overdose during his TB treatment. Desmond Doss passed away at his home in Alabama in 2006.