1940
The Western Desert Force which is 30,000 strong and under the command of Wavell takes to the offensive ‘Operation Compass’. The 4th Indian division captures the Italian camps at Nibeiwa, Tumar East and West, while the 7th Armoured drives south of the camps at Sofafi and Rabia and turns north towards Buq Buq on the coast road. As column also advances along the coast road from Mersa Matruh towards Maktila as British warshipsÂ bombard both Maktila and Sidi Barrani. Italian troops eating breakfast at Nibeiwa in are interrupted by British and Indian tanks crashing through their camp. The Italian commander ignored a report of approaching tanks given earlier by a scout plane.

Bangkok is occupied by Japanese troops as they to push through Thailand towards the Burmese border. The Japanese also continue to land troops along the Kra Isthmus in southern Thailand and at Kota Bharu in north eastern Malaya. 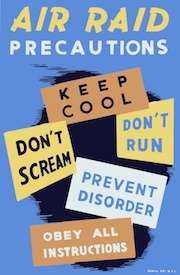 Japanese aircraft attack Alor Star airfield, Malaya. From the two squadron of Blenheims based there, only one aircraft survives; its pilot, Flt Lt A S K Scarf single-handedly overcame strong enemy defences to attack Singora airfield in the North. After recovering to Alor Star, Flt Lt Scarf died from his wounds, and was posthumously awarded the Victoria Cross five years later when the full facts of his heroism were established.

Japanese troops land on Tarawa and Makin in the Gilbert islands.

1943
The Establishment of the Council of Freedom in Denmark is announced in Britain.

The Chinese retake Changteh in Hunan.

1944
The Russians reach the Danube north of Budapest.

1945
General Patton is seriously injured in car crash in Germany.