1939
Two more U-boats are reported to have been destroyed as the British campaign to destroy three a week continues.

1940
Franco says Spain is not prepared to enter war.

Italian Naval Chief resigns, to be replaced by Admiral Campioni. 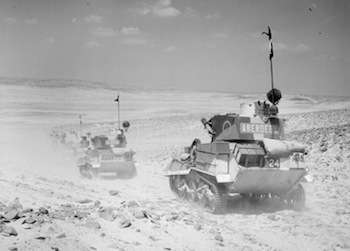 1941
Congress declares war after personal address by Roosevelt. But the vote is not unanimous. The lone dissenting vote is cast by Representative Jeanette Rankin, who was a dissenter also when Congress approved U.S. entry into World War I.

The Soviet offensive against Army Group Centre succeeds in breaking through the German lines in many places, causing hasty withdrawals by ill-prepared and frost-bitten troops that are forced to abandon much heavy equipment that was immobilized by the below-zero weather.

In occupied Poland, near Lodz, Chelmno extermination camp becomes operational. Jews taken there are placed in mobile gas vans and driven to a burial place while carbon monoxide from the engine exhaust is fed into the sealed rear compartment, killing them. The first gassing victims include 5,000 Gypsies who had been deported from the Reich to Lodz.

Japanese aircraft bomb Singapore, which as yet has not blacked out. The raid inflicts about 200 casualties, mostly civilians. Japanese troops land at Singora and Patani on the Kra peninsula in southern Thailand, which surrenders the same day. Japanese make landings at Kota Bharu on the north eastern coast of Malaya, although troops of the 8th Indian Brigade put up strong resistance against these Japanese landings. However, rumors that the Japanese had broken through the defenders, caused the RAF to evacuate Kota Bharu airfield and forced the 8th Indian Brigade to withdraw to the south after dark. Japanese troops launch an offensive against the new territories, a part of the British colony of Hong Kong. The Japanese overrun the US garrisons in Shanghai and Tientsin.

Japanese General Tomoyuki Yamashita begins his attack against the British army at Singapore. By nightfall, 60 of the 110 British and Australian aircraft defending Malaya and Singapore had been destroyed.

The British battleships Prince of Wales and Repulse, set sail from Singapore in an attempt to intercept and destroy the Japanese landings that are taking place at Kota Bharu on the north eastern coast of Malaya, while the RAF manages to damage three of enemy’s transports.

Japanese aircraft attack Guam and Wake Islands in the central pacific. The Japanese bomb the US controlled Philippine islands of Luzon and Mindanao from their bases in Formosa.

1942
German troops occupy the port of Bizerte in Tunisia.

U.S. carrier-based planes sink two cruisers and down 72 planes in the Marshall Islands.

The Red Army begins an offensive aimed at encircling Budapest.

A second Japanese airborne counter-attack on Leyte achieves some success against US airfields.

The USAAF begins a 72-day bombardment of Iwo Jima Island 700 miles to the South of Japan.