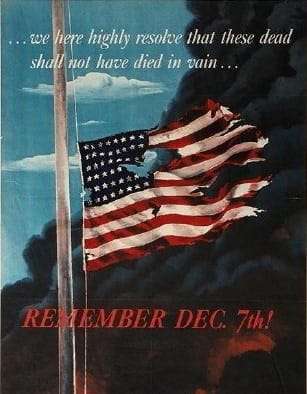 1939
Norway, Denmark and Sweden declare their neutrality. The Soviet Ninth Army launches an offensive in central Karelia. Britain and France agree to send troops and material to help Finland fight against the Soviet Union. However, there is virtually no way to get these forces to Finland and so the promises mean little.

1940
The Admiral Hipper leaves Kiel for an anti-shipping sortie into the Atlantic.

1941
At 6:15 Honolulu time, the first wave of Japanese aircraft take of from their carriers which are located about 200 miles north of Hawaii. At 7:50, 43 fighters, 51 dive-bombers, 70 torpedo-bombers and 50 ordinary bombers arrive over Hawaii. They launch attacks against the airfields at Wheeler, Kaneohe, Ewa and Hickham and against the American warships anchored at ‘Battleship Row’. Surprise was complete and within a few minutes 5 battleships and 2 light cruisers had been sunk and a large number of aircraft (180) destroyed on the ground. Within an hour, the second wave of Japanese strike aircraft (36 fighters, 80 dive-bombers, 54 bombers) had arrived over the target, sinking a further 3 destroyers and damaging another battleship. By 10:00 the attack was over and the casualties could be accounted for. The Americans lost 2,729 killed and 1,178 wounded, while the Japanese losses amounted to just 29 aircraft (59 airmen) and five mini-submarines. The Japanese launch air attacks against Manila.

The US begins mobilization.

Field Marshal von Brauchitsch after suffering a recent heart attack tenders his resignation to Hitler, although this is not accepted immediately. Zhukov issues orders to the left flank armies of his West Front to begin offensive operations against Panzer Group 2, which is attempting to withdraw out of a salient near Tula. The aim of this offensive would be to cut off Panzer Group 2 and destroy it in the area of Stalinogorsk.

1942
The US Navy launches the Battleship New Jersey, one of the four “Iowa Class” battleships, the largest ever built for the US Navy, and 11 other ships on the anniversary of Pearl harbor.

US make a beachhead South of Buna, cutting off Japanese forces there.

1944
Nazi women’s leader Gertrud Scholtz-Klink asks all German women over 18 to volunteer to serve in army or Luftwaffe to release men to the front.

1945
Japanese Gen. Tomoyuki Yamashita is sentenced to death for his role in atrocities in the Philippines. 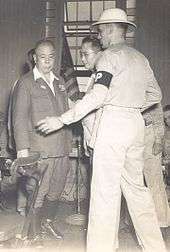