1939
Soviet attacks against the Mannerheim line are beaten back by the Finns with heavy Red Army casualties.

1940
The Western Desert Force begins Training Exercise No.2. This was a 60 mile approach march to their concentration point, designated Piccadilly, approximately 20 miles south of Maktila.

1941
Zhukov extends the Red Army’s counter-offensive along the whole Moscow axis in an attempt to prevent Panzer Groups 3 and 4 from outflanking Moscow from the northeast. To launch this offensive, Zhukov uses 4 armies on the right flank of his own West Front.

An RAF Hudson aircraft spots Japanese transports sailing west off Cape Cambodia towards Malaya.  The British, having feared a surprise Japanese attack for a number of months now, had developed a plan codenamed ‘Matador’, to advance forces into southern Thailand should the Japanese attack, in order to deny the Japanese use of the airfields and ports at Patani and Singora. However, the implications of violating Thai neutrality and more importantly the possible US reactions, dissuaded the British from launching ‘Matador’. 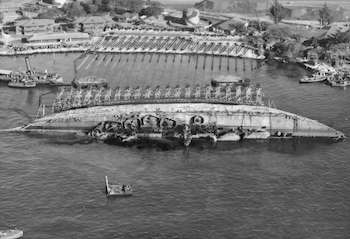 Roosevelt makes a personal appeal to the Japanese Emperor Hirohito for peace.

Soviets take Yeysk on Sea of Rostov, cutting off German Army Group A.

1944
The Japanese capture Tushan, south of the Nationalist capital of Chungking.

1945
The United States extends a $3 billion loan to Great Britain to help compensate for the termination of the Lend-Lease agreement.

USASTAF (USA Strategic Air Forces) based in the Pacific, is inactivated.