1939
Finnish forces launch a successful counter attack to the North of Lake Ladoga. 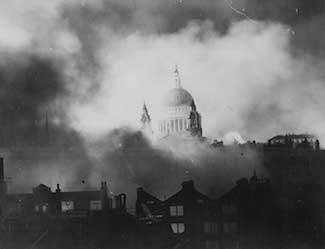 The worst Luftwaffe raid on London causes 1500 fires in the “Second Great Fire of London,” but St. Paul’s Cathedral survives.

1941
Soviet troops make an amphibious landing at Feodosiya on the south coast of the Crimea in order to relive pressure against Sevastopol and hopefully clear the Germans from the Crimea.

Japanese bomb Corregidor in the Philippines for the first time.

German submarine U-602 was commissioned.

1942
The British cruisers HMS Jamaica and HMS Sheffield join convoy JW-51B south of Bear Island as its makes the dangerous passage through the Barents Sea.

1943
The Eighth 2,000-ton air raid is flown against Berlin by the RAF on the third anniversary of the fire bombing of London.

General Eisenhower orders Allied Commanders to, as far as possible, avoid attacking the historic monuments of Italy. “Today we are fighting in a country which has contributed a great deal to our cultural inheritance,” Eisenhower wrote. “We are bound to respect those monuments so far as war allows. If we have to choose between destroying a famous building and sacrificing our own men, then our men’s lives count infinitely more and the buildings must go. But the choice is not always so clear-cut as that. In many cases the monuments can be spared without any detriment to operational needs.”

1944
In Italy, Germans retreat in Serchio Valley after counterattack against US Fifth Army.

British Commandos carried out Operation Partridge over the night of December 29/30, a diversionary raid behind German lines in Italy.

The Siege of Budapest by Soviet and Romanian forces begins.

German submarine U-322 was depth charged and sunk south of Weymouth, Dorset by Canadian corvette Calgary.