1939
First flight of the XB-24 Liberator, at Lindbergh Field, San Diego, the prototype for what will be America’s most-produced four-engine bomber of the war. 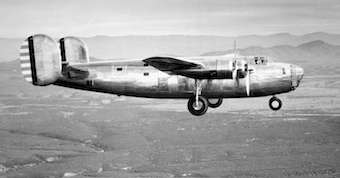 The German submarine U-30 spotted the British battleship HMS Barnham west of the Butt of Lewis in the Outer Hebrides and hit it with a torpedo. Four crew members were killed but the Barham was able to make it back to Liverpool where it underwent six months of repairs.

The British Minister of Food W.S. Morrison announced that starting January 8, rationing would be expanded to include butter, bacon, ham and sugar.

1940
Mussolini asks Hitler for support, to help the bogged down Italian forces with their offensive against the Greeks in Albania.

As food becomes scarce in Italy, the Italian government announces that in extreme cases people caught hoarding food might be executed. 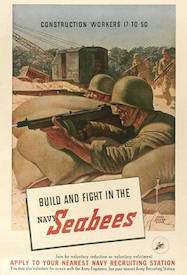 1941
General Wavell takes over command of the British forces defending Burma and India.

US authorizes first contingent of Navy Construction Battalions: the “Seabees.”

The British cargo ship Volo was torpedoed and sunk off the coast of Egypt by German submarine U-75. The destroyer HMS Kipling chased the U-boat down and sank U-75 with depth charges.

1942
The Japanese withdrawal from Buna ordered.

In the face of the continuing Soviet offensive toward Rostov-on-Don, Army Group A is ordered to withdraw its forces from the Caucasus.

1943
The British military mission arrives in Turkey to discuss the supply of arms and troops as agreed at Cairo. However, the Turks make surprising new demands, which cannot be met.

The Battle of the Bay of Biscay was fought between British and German warships. The result was a victory for the Royal Navy as two German torpedo boats and the destroyer Z27 were sunk with no British losses in return.

Corrie ten Boom is released from Ravensbrück concentration camp due to a clerical error; she would later write The Hiding Place about her experiences. Musical On the Town premieres on Broadway.

1945
The United Sstates Congress officially recognizes the Pledge of Allegiance.