1939
The first squadron of Australian airmen arrives in Britain.

1941
Japanese troops cross the river Perak. The Japanese commander General Yamashita senses that British resistance is weakening in Malaya and is determined to push home his advantage and not allow the British any time to reorganize themselves. This he does by forcing the British troops back down the coast roads until he reaches a defensive position and then outflanks it through the jungle.

Winston Churchill addresses Joint Session of Congress and receives a rousing ovation, but says allied offensive must wait until 1943. 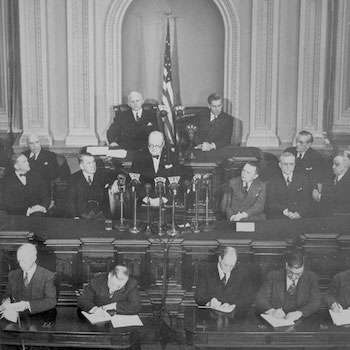 The Russians land on the Kerch Peninsula in an attempt to relieve the siege of Sevastopol.

1942
The Russians continue their advance on the southern front and claim 56,000 prisoners taken in middle Don region

1943
Ordered to sail to the Barents Sea and destroy the allied convoy JW-55B bound for the Soviet port of Murmansk, the German battle-cruiser Scharnhorst encounters a protective force of the British Home Fleet consisting of the cruisers HMS Belfast, Duke of York, Jamaica and Norfolk. After a fierce action, Scharnhorst is sunk, with only 36 of her crew of 1,839 surviving.

US Marines land at Cape Gloucester, New Britain in the Solomons; they encounter little opposition due to heavy bombing.

British ships sink German battlecruiser Scharnhorst in the Battle of North Cape off Norway; only 36 of 1963 men survive.

Bastogne is relieved by the U.S. 4th Armored Division.

US Third Army’s 4th Armored Division under Patton open a corridor to Bastogne, relieving the defenders. German Ardennes Offensive grinds to a halt due to supply problems caused by Allied bombing.