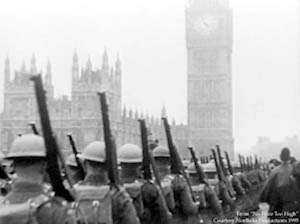 Churchill broadcasts to Italy: ‘All because of one man’.

Italian torpedo boat Fratelli Cairoli sinks after hitting a mine off the coast of Tripoli.

1941
Concerned about the safety of the founding documents of the United States in wartime Washington, the Declaration of Independence and the Constitution are removed from their display space at the National Archives and are transported in a special sealed container to temporary storage at the U.S. Gold Depository at Ft. Knox, Kentucky. On Oct. 1, 1944, with the danger to the mainland United States passed, the documents are returned to public display in Washington.

Under continuous pressure, Rommel and his Afrika Korps start to evacuate Benghazi.

The Japanese launch their first bomber attack on Rangoon. They suffer heavy losses to RAF fighters, but press home their attack, inflicting substantial damage to docks at Rangoon.

The Japanese launch another attack against Wake Island, overwhelming the small US garrison. Immediately after its capture, the Japanese rename the Island as Bird Island. Rear-Admiral Frank J. Fletcher’s task force is still more that 400 miles away and so is diverted to Midway. American and Filipino troops of the North Luzon Force, begin to fall back towards the River Agno under heavy pressure from the Japanese.

Off Cambria CA, Japanese sub I-21 sinks US tanker Montebello in sight of the coast; survivors machine-gunned in lifeboats but no one is injured.

1942
Having advanced as far as the Myshkova river 30 miles southwest of Stalingrad, the three Panzer divisions of the relief force have exhausted their power and begin to withdraw towards their starting line at Kotelnikovo.

1944
A breakthrough to the South West of Budapest is now 60-mile wide.

A German E-boat force is routed off the Scheldt Estuary. 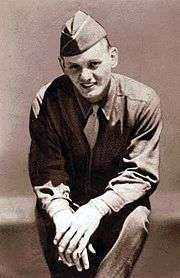 1945
General Dwight D. Eisenhower confirms the death sentence of Private Eddie Slovik, the only American shot for desertion since the Civil War.

In US, all horse and dog racing banned to save labor, effective January 3, 1945.

At Papago Park camp in Arizona, 25 German POWs escape, ecstatic about successes in the Battle of the Bulge.