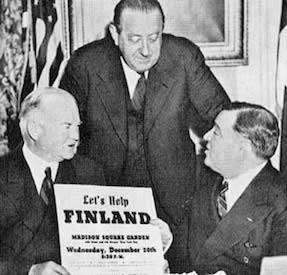 The Russians cease their attacks at Summa, leaving Finnish forces in control of the wholeÂ Mannerheim defensive line, except the Oinala Bulge.

1940
The Luftwaffe continues its attacks against British cities, this time hitting Liverpool.

No Italian troops are now left on Egyptian soil, except as prisoners.

1941
Propaganda Minister, Josef Goebbels broadcasts an appeal for winter clothing for the German troops on the eastern front.

German forces of Army Group Centre retreating from before Moscow reach a new defensive line more than 100km to the west, where, following strict orders by Hitler, they are to stand and fight off any further Soviet advances.

Admiral Royal E. Ingersoll takes over command of the Atlantic Fleet, from Admiral Ernest J. King who is appointed as Commander, US Navy

1942
The navigation and bombing radar aid ‘Oboe’ is used operationally for the first time by Bomber Command.

The Japanese bomb Calcutta for the first time.

US counter intelligence reports the smashing of a Nazi spy ring in Sicily. A 19-year-old ringleader ‘Grammatico’ and 27 others are arrested.

The heaviest raid of war on Frankfurt with more than 2,000 tons dropped by RAF. Mosquito raiders follow half an hour later to hamper the fire fighters efforts.

De Lattre de Tassigny meets de Gaulle in Algiers before taking command of ‘Army B’, for liberation of France.

The British reach the Maungdaw plain in Arakan, Burma.

1944
In their torturous advance toward the Meuse river, armored units of 6th SS Panzer Army capture Stavelot, searching for allied fuel dumps to replenish their nearly exhausted supplies of gasoline.