Lavrenti Beria, head of the NKVD, orders the start of large-scale deportation of Poles to the USSR.

The RAF launch another daylight raid against German shipping in the Schillig Roads, but lose 12 out of 24 bombers. This was the culmination of a series of RAF daylight raids which had cost an increasing number of aircraft. This eventually caused the RAF to switch to night raids to reduce casualties.

1940
Hitler issues Directive No. 18, confirming plans for Operation ‘Barbarossa’, previously Operation ‘Otto’, the attack against the Soviet Union. The aim of this new plan was to destroy the Red Army in western Russia, before moving against Moscow. All preparations were to be completed by the 15th May 1941. 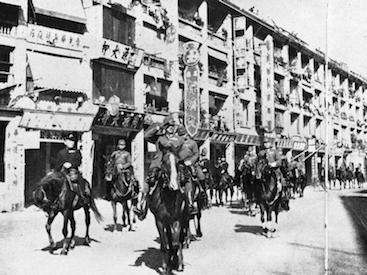 In Britain, all unmarried women ages 20-31 are called up and required to choose between ATS, WRNS, WAAF, Civil Defense, Land Army, or war industry work, the first military conscription of women in any country.

US lands on Musita Island off Buna, New Guinea.

1943
The Kharkov four are sentenced to death.

1944
‘Operation Wacht am Rhein’ begins to bog down in the face of stiffening U.S. resistance and the lack of adequate logistical support, notably fuel for the armored Kampfgruppen of the 6th SS and 5th Panzer Army’s.