1938
Italy declares the 1935 pact with France invalid, because ratifications had not been exchanged. France denies the argument.

1939
Unable to complete the repairs to the Admiral Graf Spee within 24 hours, the time limit stipulated by international law for foreign warships inÂ neutral ports to leave and under strict orders by OKM not to go in to internment in Uruguay, Captain Langsdorff takes his ship outside the harborÂ of Montevideo and orders his crew to scuttle her, thus denying the British fleet that’s converging on the River Plate the opportunity ofÂ destroying her in an unequal battle.

While pursuing the retreating Italians, the British forces in North Africa take Sollum, Fort Capuzzo and several other crucial Italian defensiveÂ positions. They also capture another 38,000 Italians along the way.

Destroyer Acheron sunk by mine off Isle of Wight.

Japanese troops make gains in northern Malaya and are now only 10 miles from Penang, as British and Commonwealth forces begin to fall back to theÂ river Perak.

1942
The British Parliament vows to avenge Nazi crimes against Jews, as Eden announces that the Germans ‘are now carrying into effect Hitler’s often

repeated intention to exterminate the Jewish people in Europe’. U.S. declares those crimes will be avenged. 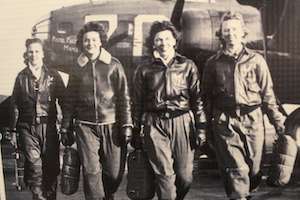 The U.S. Fifth Army captures the village of San Pietro in central Italy after 10 days of heavy fighting.

Roosevelt reveals a plot to assassinate him at Teheran.

After some deep penetrations into the lines of the unprepared American forces, the Germans make only slow progress due to limited roads as well asÂ difficult terrain and weather conditions in the Ardennes, not reaching any assigned first day objectives. The allies rush reinforcements to theÂ Ardennes.

The German Army renews the attack on the Belgian town of Losheimergraben against the defending Americans during the Battle of the Bulge.

The bodies of 81 American soldiers from Battery B of the 285th Field Artillery Observation Battalion, killed by Waffen SS troops, Dec. 17, 1944,Â during the Battle of the Bulge near the Belgian town of Malmedy.

The U.S. Army Air Force begins preparations for dropping the Atomic Bomb by establishing the 509th Composite Group to operate the B-29s that willÂ deliver the bomb.

1945
The Senate votes for U.S. help in establishing a Jewish homeland in Palestine.