1937
The Japanese change the name of Peiping to Peking. They also begin what will be known as the Rape of Nanking, during which they massacre an estimated quarter of a million Chinese.

1939
Because of its brutal aggression against Finland, the Soviet Union is expelled from the League of Nations. 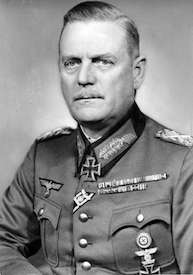 As German forces evacuate Kalinin, 100 miles to the Northwest of Moscow, Hitler furious at what he sees as weakness by his Generals, countermands Field Marshal von Brauchitsch’s plans for withdrawal.

Thailand formally allies herself with Japan.

Japanese troops continue to land throughout the Philippines.

1944
Congress passes and President Franklin D. Roosevelt signs into law an act authorizing the creation of the ranks of General of the Army and FleetÂ Admiral, so that the highest American officers can attain a rank equivalent to that of Field Marshal. Over the next week, George C. Marshall,Â Douglas MacArthur, Dwight D. Eisenhower and Henry “Hap” Arnold are promoted to the rank in the Army, while William D. Leahy, Ernest J. King andÂ Chester Nimitz are made Fleet Admirals. Subsequent to the war, William F. “Bull” Halsey will be promoted Fleet Admiral and Omar N. Bradley will become the last General of the Army.

U.S. troops capture an important Japanese supply post on Leyte, at the southern tip of the “˜Yamashita defense line”.

1945
SS personnel convicted of atrocities at Belsen and other concentration camps, are hanged.