1939
In the south Atlantic, the pocket battleship Admiral Graf Spee, fights an action against three British cruisers, HMS Achilles, HMS Ajax and HMS Exeter, which results in serious damage to both sides. HMS Exeter is rendered a blazing hulk and the Graf Spee withdraws to the neutral Uruguayan port of Montevideo for repairs.

British General Richard O’Conner decides his tank raid against Italian troops is going so well he will make it a full-fledged offensive. One of O’Conners officers reports having captured “five acres of officers, 200 acres of other ranks,” as the Italians surrender en masse.

Hitler issues Directive No. 20, the order for the preparation of Operation ‘Marita’, the plan for sending German forces to revive the bogged-down 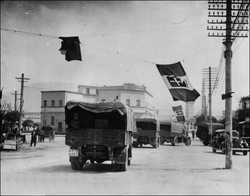 Twenty four German divisions begin their redeployment to Romania, through Hungary as part of Directive No. 20, Hitler’s order for the preparation of Operation ‘Marita’, the attack on Greece.

1941
The Soviet press issues a triumphant statement on the repulse of the German Armies before Moscow. The Red Army launches a new counter-offensive using Timoshenko’s South West Front in an attack northwest against the juncture of Panzer Group 2 and the German 2nd Army between Yelets and Livny. This results in Panzer Group 2’s right flank being left open as the 2nd Army is forced to withdraw in order to save itself. Field Marshal von Brauchitsch meets Field Marshal von Bock, C-in-C of Army Group Centre and decide that Army Group Centre must withdraw some 90 miles west to take up a ‘winter line’. Secret orders are passed to this effect.

The British manage to turn back an Italian convoy, which is taking supplies to Libya, by making it believe that its under threat from the Mediterranean Fleet.

The British Governor of Hong Kong rejects a Japanese demand for his garrisons surrender. British troops in the southern tip of Burma begin toÂ withdraw north towards Rangoon.

1942
Rommel begins to retreat from his positions El Agheila, as the Eighth Army continues advance in to Libya. 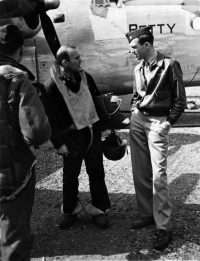 1943
Captain. James Stewart of the US 445th BG flies his first mission in a B-24 Liberator bomber for the US Eighth Air Force in England.

54 Mustangs escorted B-17s 490 miles on a raid over Kiel, Germany, and for the first time in the war successfully defended the bombers for 40Â minutes over the targets, shooting down enemy fighter planes.

German forces of 7th Armee withdraw in to the fortified positions of the Westwall.

The U.S. cruiser Nashville was badly damaged in a Japanese kamikaze suicide attack that claimed 138 lives.