1937
The Japanese fire on British and U.S. ships on the Yangtze River in China, sinking the American ship Panay. The Japanese apologize to the United States and pay reparations; the British refuse to accept any Japanese apology.

1939
Finnish have some success against Russian troops at Tolvajrvi, inflicting heavy casualties.

Two German cruisers which are accompanied by 5 destroyers are damaged by torpedoes from the British submarine HMS Salmon as they are return from a mine laying operation of the northeast coast of England. Later in the day, HMS Salmon also gives warning under the ‘rules of war’ to a German liner, although it reaches the port of Bremen safely. 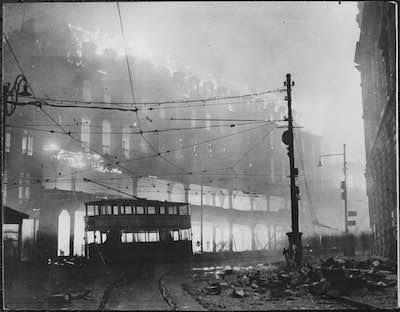 Sheffield is heavily bombed by the Luftwaffe.

Philip Kerr, Lord Lothian, British ambassador to the US, dies in Washington DC

1941
The ship “Struma” leaves Romania for Palestine carrying 769 Jews but is later denied permission by British authorities to allow the passengers to disembark. In Feb. 1942, it sails back into the Black Sea where it is intercepted by a Soviet submarine and sunk as an “enemy target.”

Bulgaria declares war on both Britain and the United States.

Hungary  and Romania declare war on the United States.

The United States. declares war on Hungary, Romania and Bulgaria after receiving those country’s declarations of war.

1942
Manstein launches his counter attack with a hastily assembled force of 13 divisions, including three Panzer divisions with about 230 tanks to try and relieve Sixth Army at Stalingrad.

The 1,500 ton destroyer HMS Partridge is sunk off the coast of Algeria by U-565, commanded by Wilhelm Franken.

1943
Rommel becomes C in C of Army Group B, which covers the coastal defenses from Holland to Bay of Biscay.

A Czech-Soviet treaty of friendship is signed in Moscow.

1944
The underground V-weapon factory at Wittring is captured by the U.S. Third Army.