After landing on the beaches on D-Day, the Allied troops had to make their way further inland, capturing key locations to allow forces from the various beaches to link up. The road, known as causeway #2, leading inland from Utah beach passed through the villages of Sainte-Marie-du-Mont, Verville and Saint-Côme-du-Mont, leading into the town of Carentan, an important target. The junction of the roads from Sainte-Marie-du-Mont and Saint-Côme-du-Mont would come to be known as Dead Man’s Corner.

The area was defended by the German 6th Fallschirmjäger Regiment, the “Green Devils” of Major von der Heydte (who, coincidentially, was cousin to Colonel Claus von Stauffenberg, who tried to kill Hitler with a bomb on July 20, 1944 during Operation Valkyrie). Fate pitted the heavily dug-in Green Devils against their American counterparts, the Screaming Eagles of the 101st Airborne Division. 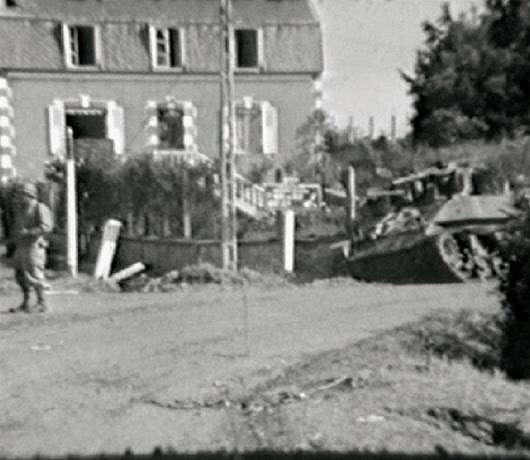 On June 7, the paratroopers have linked up with a platoon of 6 Shermans and several M5 Stuart light tanks, and were approaching the outskirts of Carentan amidst heavy fighting in the hedgerows. Not far from the town, they came up on a crossroads dominated by a large building, its corner painted red and white: the headquarters and aid station for the 6thFallschirmjäger. The Stuart at the head of the line was knocked out right at the crossroads by a Panzerfaust fired by Bruno Hinz. The shot killed the tank commander 1st Lt. Walter T. Anderson, whose body was left hanging halfway out of the hatch.

In the first days following D-Day, priority lay with getting the troops and artillery off the Utah Beachhead and moving inland; there was no time to deal with the dead and wounded. The Stuart, with Lt. Anderson still hanging out of the turret, was moved to the side of the road to make way for the line of tanks to proceed towards Carentan. With D-Day being imminent, the Germans had removed all road signs in Normandy to make it as hard as possible for the Allied invasion troops to find their bearings. As a consequence, there was no road sign at this particular crossroads pointing the way to Carentan. The Stuart tank became a reference point for the troops moving inland and they soon started to refer to the crossroads as “the corner with the tank with the dead man in it,” which was later shortened to Dead Man’s Corner, the name by which it’s known today.

At least that is the best-known version of the story. Some historians, such as Mark Bando, a specialist on the 101st Airborne, suggests that it wasn’t the commander who died in the tank, but the driver, and that rather than hanging out through the hatch, he remained in his seat, only visible if someone walked up to the vehicle and peered inside from a specific angle. While the opinion might forever remain in contention, it’s a fact that there are no visible corpses on the two contemporary photographs of the tank. 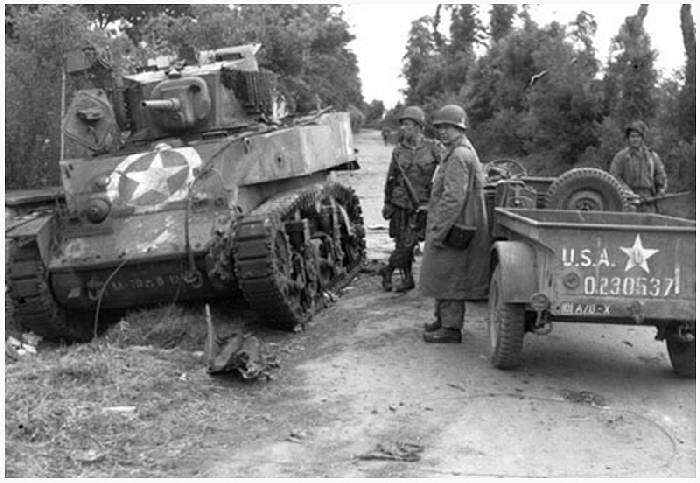 Today the former headquarters is the heart of the D-Day Experience with a C-47 simulator as well as the Dead Man’s Corner Paratrooper Museum, which not only documents the incident, but also displays several unique historical artifacts, including items owned by Dick Winters and other notable members of Easy Company.

Take a look at these other D-Day Posts: