Combat America by Clarke Gable was originally intended to be used as a recruiting film for aerial gunners, however, by the time it began production, the needs for gunners had lessened. The film was completed as an account of aerial combat over occupied Europe and as a testament to the Eighth Air Force aircrew and ground crew in England. 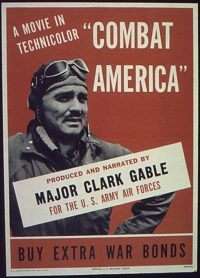 At the time of the Combat America’s production in 1943, Gable was a 1st Lieutenant in the Eighth Air Force, part of the United States Army Air Forces. While he was stationed in England, Gable flew five combat missions from May 4–September 23, 1943, and during one of them, his boot was struck by an anti-aircraft shell, and he was nearly hit by other flak bursts.