The Battle of La Fière Bridge

Jumping on the night of D-Day, the 82nd Airborne had to capture the town of Sainte-Mère-Église. Holding the town, however, would have meant little without also holding the roads to and from it. One such route had a bottleneck:  the La Fière Bridge a small stone bridge at La Fière manor, 700 yards to the west of the outskirts. The manor itself was a small group of buildings a grenade-throw away from the bridge. On the far side of the bridge, the road led west, the small hamlet of Cauguigny standing by it two-thirds of a mile away. 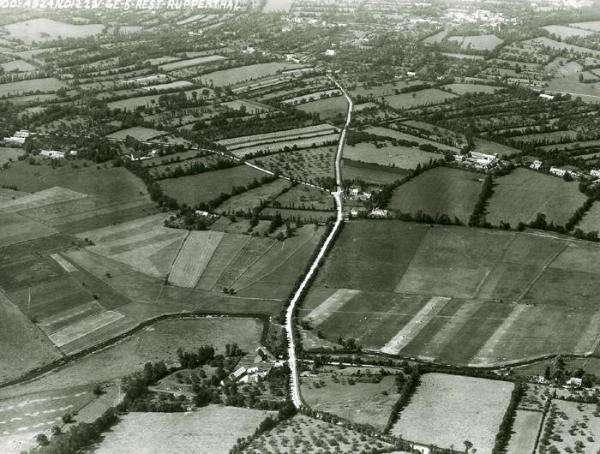 Securing La Fière Bridge fell to the 505th PIR. The 1st Battalion was one of the few units that night to jump on time and land in its designated drop zone to the east of the bridge, between it and the town. They quickly learned that things were not as expected: the Germans have flooded large areas of Normandy and the tiny Merderet River running north-south under the bridge was now a marsh 1,000 yards across at its narrowest. The elevated road between the bridge and Cauguigny became a causeway surrounded by water, providing no cover. 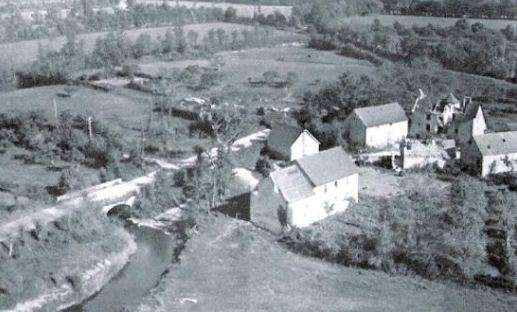 An hour before dawn, 1st Lt. John “Red Dog” Nolan, nicknamed for his hair and his canine tenacity, led his company towards La Fière Bridge and manor. With visibility low due to hedgerows, stone walls and the darkness, Nolan told Lt. Dolan Coxon to send his scouts forward. Coxon didn’t have the heart to send his men alone into harm’s way and accompanied them. A few moments later, German machine gun fire barked up and killed Coxon and another man. With two platoons trying to flank the foxhole, a firefight developed and the Americans got pinned down. After about an hour, the Germans quietly withdrew without losses. 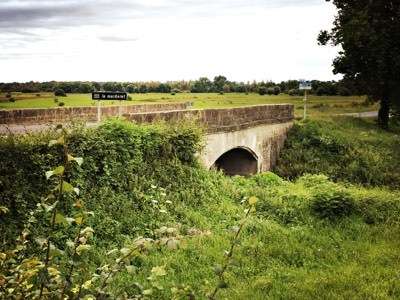 Unknown to Nolan and his men, they were not alone. Many of the airborne who were misdropped in the area honed in on the only landmark in the flooded plain: the causeway. They were now arriving piecemeal, but most of them have lost their radios in the water and couldn’t inform others of their presence. When these surprise reinforcements started showing up, Nolan drew up a plan to attack the manor from the north and the south simultaneously. Units were put in place, one of them wading through the neck-deep swamp with bullets ricocheting off the water around them. However, the runner who was supposed to give the message to attack got lost and coordination was broken. At 9 am, Brig. Gen. James Gavin arrived with 300 men from the northwest on the far side of the causeway. After being briefed on the situation, he decided it was in good hands and moved on south to capture another bottleneck along another road further away.

Despite the lack of coordination between units, the airborne finally reached the manor. Some 10 to 12 Germans fought back from inside but were suppressed in 10 minutes of fierce fighting. Seeing a white sheet being hung from a window, a paratrooper went forward to accept the surrender, only to get shot by a German who was standing by another window and didn’t know his comrades had already given up. After another round of furious firing, the defenders finally surrendered for good. 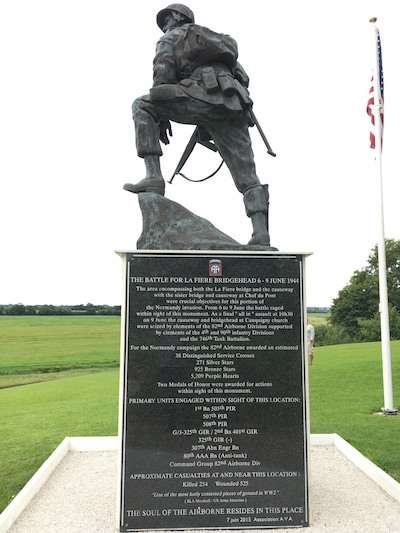 At 1:45 pm, with the manor in American hands, two men were sent to scout out the La Fière Bridge. German soldiers hiding on the far side tried to ambush them, but one of the men, Pvt. James Mattingly, shot the first man then wounded and captured the rest, later receiving the Silver Star for what one officer called “the best piece of individual soldiering I have ever seen.” The La Fière Bridge and the causeway were clear and a nine-man force was left on the west end in the half-dozen stone buildings of Cauguigny. The causeway was blocked by a truck, mines were laid and three anti-tank guns brought in by glider were set up.

The German counterattack came at 4 pm. Three German-driven French light tanks appeared with infantry in tow from the west, overrunning the force in Cauguigny and heading for the causeway. About a dozen US airborne were driven in front of the tanks as human shields, forced to pick up mines and throw them into the water. Once they were 40-50 yards from the defenders, American bazooka teams and anti-tank guns opened up while the captured paratropers dove for safety. The first tank was destroyed, followed by the other two, but at a high price: German infantrymen, using the tanks as cover, poured automatic weapons fire into the defenders, causing heavy casualties before retreating to the west end of the causeway. With depleted numbers and low ammo, but in a strong position and with additional reinforcements arriving, the American dug in at the manor while the Germans did the same on the far side of the swamp. 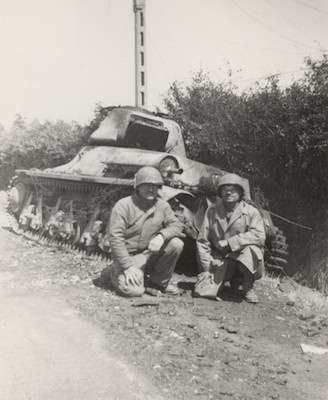 With the fight for Sainte-Mère -Église still going on, both sides started building up their numbers at La Fière Bridge, until June 9 brought a need to break the stalemate. By this point, the 4th Infantry Division had made its way up from Utah Beach and needed the road cleared to proceed. Twelve Shermans and an artillery battery were brought up for the final push with the airborne to spearhead the attack with a suicidal charge down the exposed, 1,000 yard long causeway into German machine gun and mortar fire. Lt. Col. Charles Carrell’s 2nd Battalion, 401st Glider Infantry Regiment was given the thankless task.

Carrell lost his nerve in the last moment and declined to attack and was replaced on the spot. At 10 am, rifles, machine guns, tanks and artillery all opened up, and G Company’s Cap. John Sauls was the first to jump onto the causeway with a shout of “Follow me!” Some men faltered in the face of certain death, other were cut down running and yet others fell down wounded or trying to scramble for some cover. Miraculously, Sauls himself made it across the corridor of fire and ran past the first line of German defense, shooting Germans with his Thompson SMG.

The causeway got quickly congested with the dead, the dying and the terrified; but the push got going. At one point, General Matthew Ridgway, commander of the 82nd Airborne Division was spotted on the causeway, trying to remove a cable from a knocked-out tank to make it easier to pass. He was soon joined by General Gavin. The sight of the division’s two highest-ranking officers in the middle of the killing zone has inspired the troops to push themselves beyond all limits and the Germans were forced to flee. A final, heavy counterattack was repulsed later that night and the battle for the La Fière causeway was won, allowing allied forced to move west and further into the Cotentin Peninsula.

Visiting La Fière in the 1980s, General Gavin recalled the aftermath of the battle: “When I came to this point […], I had no idea as to how hard this fight was. I looked back down the causeway. It was covered from the church to as far as I could see with bodies. I could have walked back to the bridge and never stepped on pavement. I just had no idea as to the strength of the position. It took airborne soldiers to do this.”