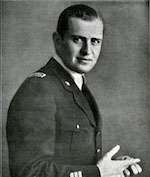 Joseph Stalin appoints himself Generalissimo of the Red Army.

Konoye asks FDR for summit meeting. He also proposes a Chinese police corps with Japanese officers and a timetable for a withdrawal of troops from China.

1942
Units of the 6th Army cross the Don river at Kalach during their advance toward Stalingrad.

The creation of Palestine Regiment of the British Army is announced. General Gott, the Eighth Army’s commander designate, is shot down while en route for Cairo. Montgomery is chosen instead.

The U.S. 1st Marine Division under General A. A. Vandegrift lands on the islands of Guadalcanal and Tulagi in the Solomon islands. This is the first American amphibious landing of the war.

1944
The German 2nd, 116th, 1st SS and 2nd SS Panzer divisions, with 145 tanks to the East of Mortain launch ‘Operation Luttich’, to counter-attack against the U.S. 3rd Army’s sweep to the South. The Germans move against Avranches and achieve some success at Mortain. Assisted by RAF Typhoons, the Americans are able to stop the Germans by the atfernoon. U.S. 15th Corps is turned north to meet the Canadians in Falaise.

The Russians advance into the foothills of the Carpathian Mountains, near the Slovak, Hungarian, Russian borders.