1940
U.S. and Vichy France reach Green-Slade-Robert Agreement, an understanding on the status of French warships and aircraft in the French West Indies.

Montreal mayor Camillien Houde is arrested, and charged under the Defence of Canada Regulations. He is imprisoned at Camp Petawawa in Ontario until the end of the war.

Anglo-Polish military agreement signed. Churchill and de Gaulle agree over organization of free French forces. German government announces that in future all citizens will need an Ahnenpass (Certificate of Ancestry) proving their racial purity back to 1800.

The Italian air force raids Berbera, Aden, Burao and Zeila. Italian troops In Italian Somaliland then occupy Zeila, thereby sealing the border between French and British Somaliland and opening up the coastal track to Berbera.

1941
British and Soviet troops invade Iran from south and north to forestall any German incursions in the wake of the failed coup by anti-British elements in Iraq that was supported by German special forces flown in from Greece. 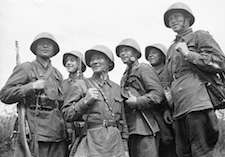 20 Soviet divisions encircled at Uman, in the Ukraine. German troops conclude the battle of encirclement at Smolensk and take 310,000 Red Army prisoners as the remnants of 16th and 20th Armies surrender.

Romanians begin a 73-day siege of the Black Sea port of Odessa.

1942
Allied convoy SC-94 is sighted by German U-boat in the Atlantic, when a group of 6 ships with 2 escorts get lost from the convoy due to the fog. One ship is sunk, but two U-boats are driven off.

1st Panzer Army captures Voroshilovsk, over 200 miles to the south east of Rostov. The 4th Panzer Army moving northeast runs straight into the Soviet 64th and 57th Armies. Stalin creates the new Southwest Front out of a part of the forces assigned to Stalingrad Front.

Churchill visits the Eighth Army at El Alamein and decides to replace Auchinleck.

1944
The U.S. XV Corps makes 50kms in about 7 hours, crossing the Mayenne river at Mayenne, while further south the river is reached at Laval.

The Polish Home Army goes onto the defensive in Warsaw, as 60 per cent of city now in its control. The 4th Ukrainian Front is inserted in the Russian line in southern Poland and northern Hungary.

The British capture Tamu, across the Burmese border.