1939
The British fleet is put on full alert. 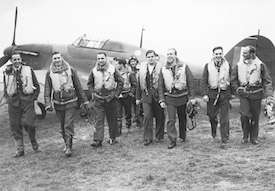 RAF’s worst day in Battle of Britain: most bases out of action, 41 planes lost.

1941
German Army Group South manages to move some of 17th Army across the Dnieper river Southeast of Kremenchuk.

British forces reach Hamadan, Iran and have now secured the Persian Gulf and its vital oilfields.

1942
Rommel begins his final attempt to break through at El Alamein in the battle of Alam Halfa. However, the 15th Panzer Division fails to break through the 8th Army’s lines and sustains heavy casualties losing about 30 tanks forcing the Germans to withdraw back to their start lines. (MORE INFO)

The US aircraft-carrier Saratoga is attacked and damaged by a Japanese submarine near Santa Cruz.

The Japanese submarine I-8, reaches France after a marathon voyage from Penang in Malaya.

The government lifts its ban on “pleasure driving.” Police had previously been able to stop cars at random and ask drivers their destination and purpose. I a patrolman wasn’t happy with a driver’s answer, he could confiscate the driver’s gas ration stamps.

1944
The British 11th Armored Division captures Amiens and take the German bridge across the Somme in surprise attack. Montpellier, Beziers, Narbonne and Nice all taken. The U.S. Third Army reaches the river Meuse.

The U.S. Fifth Army crosses the Arno while the Eighth Army attacks the Gothic Line in Italy.

The Soviet 3rd Ukrainian Front captures Bucharest, the capital of Romania and begins to round up members of the ‘Fascist’ Antonescu government.

Aircraft from a U.S. carrier force (Task Force 38) commence a 3-day attack on Iwo Jima and the Bonin Island in the western Caroline’s and Visayas Archipelago, which is the next step to the Philippines.

1945
As U.S. troops release POW’s, many reports of systematic degradation are heard. Tokyo is reported as 85% bomb damaged, although this is not as bad as Berlin. Japanese garrison at Marcus Island surrenders to the Americans.