In an effort to avert war between her allies Romania and Hungary and to secure his southern flank prior to attacking the Soviet Union, Germany and Italy under the second Vienna Award compel Romania to cede large chunks of her territory to Hungary and Bulgaria, in exchange for a German guarantee of security for the rump Romanian state.

1941
Manufacturers in the United States complain to the government that they are making do without steel in order to supply the British war needs, while the British continue to export steel to South American countries.

The German 20th Panzer division destroys the northern Front’s already broken Soviet 48th Army, and takes the town of Mga, 40 kms to the Southeast of Leningrad. Nazi forces began a siege of Leningrad during World War II that lasted nearly two and a half years.

1942
The formal annexation of Luxembourg to Reich leads to a general strike. Use of French accents in the written Luxembourg dialect is now liable to fines.

With the Punishment Battalions as rear guards, the Soviet 62nd and parts of 64th Army escapes encirclement by the 48th Panzer Corps and withdraw across the Chervlennaya river.

U.S. Naval and Army forces occupy Adad, Aleutian Is. for an air and naval base.

Chinese claim the recapture of the whole of Kiangsi, which was captured in last Japanese offensive.

1943
An air battle between 44 USAAF P-38s and 75 Luftwaffe fighters commences above Italy. The the P-38s were escorting a large formation of B-26s on their way to bomb marshaling yards at Aversa. The Americans lose 13 aircraft and shoot down 9 Axis aircraft, thus allowing the B-26s to make an unmolested bombing run to their target, where they cause extreme damage without loss.

The Danish Prime Minister, Scavenius refuses to serve under the Germans.

Taganrog on the Sea of Azov is evacuated by the Germans.

1944
The U.S. 3rd Army, whose 4th Armored Division is already at Troyes is ordered to continue East until the tanks run dry and from that point, to advance on foot, in order to get across the Meuse river.

Canadian Armored forces with the British 8th Army attack west of Pesaro. Without supporting artillery, they are beaten back by the Germans, who destroy or badly damage 32 of the 50 tanks engaged in the attack. German troops withdraw from Bulgaria.

Ploesti, the center of the Romanian oil industry, falls to Soviet troops. 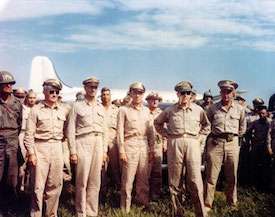 Two Japanese submarines, the largest in the world (5,500 tons), surrender in Sagami Bay after completing their first and only operational trip.