1940
Germany apologizes to Eire for Wexford bombing. Intense dogfights over London and Home Counties. Britain refuses German proposal to use 64 Red Cross ships to rescue airmen from the English Channel.

Vichy France agree to Japanese demands that they be allowed to station forces in northern Indochina.

First mass jump by US paratroopers, at Fort Benning, GA.

1941
Despite protests, Vichy parliament moves to holiday resort in the hills. 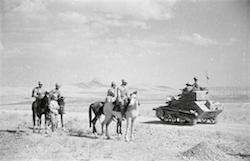 Russians evacuate Karelian Isthmus to Leningrad. The Finnish troops capture Vyborg and are now only 30 miles North of Leningrad.

The American Red Cross announces that Japan has refused to allow safe conduct for the passage of ships with supplies for American prisoners of war.

1943
Martial law is declared in Denmark and the Danish Royal Family are ‘isolated’ by the Germans.

1944
American troops marched down the Champs Elysees in Paris as the French capital continued to celebrate its liberation from the Nazis.

The British begin the ‘Race for Amiens’. U.S. troops liberate Soissons, 60 miles Northeast of Paris. Montelimar is taken by the French who also cross the Rhone in several places. The Canadians enter Rouen.

The Russians capture the Romanian oilfields at Ploiesti and enter Hungarian occupied Transylvania. An uprising begins in Slovakia against the pro-German government of Dr. Tiso.

The Russians announce the capture of 513,000 prisoners in the Manchurian campaign.

The Soviets shoot down a B29 dropping supplies to POWs in Korea.

U.S. airborne troops are landed in transport planes at Atsugi airfield, southwest of Tokyo, beginning the occupation of Japan.

First Allied POWs in Japan are liberated, from Camp Omori, by US Navy forces.