1939
A mutual assistance treaty is signed by Poland and Britain. Mussolini complains to Hitler that he is not yet ready for war.

1940
Luftwaffe attacks continue against the RAF’s airfields in southeast England.

The first night-attack by RAF on Berlin’s industrial targets is made by 43 aircraft from RAF Bomber Command in retaliation for the accidental attack on London the night before.

1941
Panzer Group 2, along with the 2nd Army, attack southeast from their positions around Gomel and Bryansk, in an attempt to link up with units of Army Group South and encircle Kiev. Panzer Group 1 begins a breakout towards the north from its bridgeheads across the Dnieper, with the aim of linking up with units of Army Group Centre east of Kiev. The German 6th Army engages the bulk of the Soviet forces gathered around Kiev to stop them from retreating.

British and Soviet forces enter Iran, opening up a route to supply the Soviet Union. 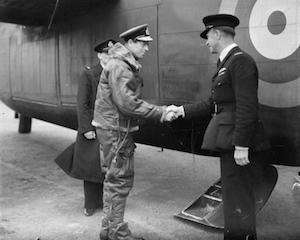 RAF officer Prince George, Duke of Kent, brother of King George VI, is killed in a plane crash in Scotland, age 39, the first death of a member of the Royal family in military service in 450 years.

The 4th Panzer Army breaks off attacks south of Stalingrad. Communist Party Committee of Stalingrad proclaims a state of siege.

According to some sources Japanese succeed in landing troops on Guadalcanal in the night from destroyers. Nauru, Gilbert Is. and Goodenough, off the SE coast of New Guinea are occupied by Japanese. Battle of Milne Bay, Papua, begins. Japanese Special Naval Landing Force of 1,200 men come ashore.

Battle of Eastern Solomon’s continues with a Japanese destroyer being sunk off Santa Isabel.

1943
140 Allied fighters and 136 bombers strafe and bomb the airfield at Foggia, as part of the preparations for the invasion of the Italian mainland. Many axis aircraft are destroyed in these raids.

The Russians continue their advance to the West of Kharkov.

Lord Mountbatten becomes the supreme allied commander in South East Asia Command.
US forces complete the capture of New Georgia in the Pacific. Japanese fall back to Francisco River where it runs into Bayern Bay on New Guinea while being pursued by Australian and American troops.

Finland enters secret negotiations with the Russians to agree a cease-fire.

1945
7 U-boat men are executed at Fort Leavenworth, Kansas for the murder of a fellow U-Boat man, Werner Drechsler who they had judged as a traitor.

Chinese troops are reported to have entered the Republican capital of Nanking.