1940
USS Constitution named symbolic flagship of US Fleet at Boston. 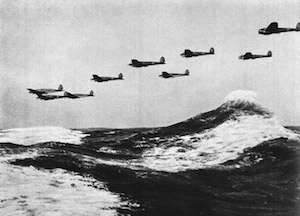 The Luftwaffe begins a new phase in its offensive by sending over a higher proportion of fighters to bombers, in an effort to keep losses down.

The unofficial start of the Blitz on London begins with a lost formation of German bombers mistakenly dropping their bombs over the capital, damaging St. Giles and Cripplegate.

The German battleship Bismarck is commissioned.

Churchill broadcasts and warns Japan that its aggression must stop.

The U.S. government declares the cosmetics industry nonessential, and the metal and plastic used for lipstick containers and compacts are earmarked for military use.

1942
The Russians launch a new offensive in Leningrad area. Stalin orders that the city of Stalingrad is to beÂ held at all costs and sends Marshal Zhukov to supervise its defense.

Battle joined in the Eastern Solomons with the Japanese trying to land reinforcements on Guadalcanal. USÂ forces beat off the Japanese Combined Fleet sinking the carrier Ryujo, but suffering damage to the carrier Enterprise.

Himmler, becomes the Minister of the Interior.

1944
The Germans stage comeback in Paris, with fierce fighting reported. Bordeaux is evacuated by German troops who occupy fortified bunker positions on the Gironde west of the city.

Malinovsky and Tolbuklin link up to encircle 20 divisions of the German 6th and 8th Army’s in the area of Kishinevin in Romania.

1945
The Japanese news agency says that all Japanese troops are to be out of the U.S. landing area by tomorrow.