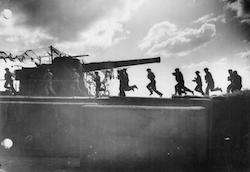 Churchill dispatches a heavily armed convoy with 150 tanks to reinforce the middle east.

1942
Brazil declares war on Germany and Italy after 16 ships lost to German U-boats, opening airbases to cover Allied shipping and opening the South Atlantic air route; Brazil will be the only South American country to send troops to fight overseas—Brazilian troops will serve with distinction in Italy.

The Admiralty announces the loss of the famous submarine Upholder.

The advance of 17th Army toward the Black Sea port of Suchumi west of the Caucasus bogs down.

1944
The Royal Navy Fleet Air Arm begins four days of attacks on the German Battleship Tirpitz and other shipping in the Alten Fjord, Norway.

The Red Army captures Jassy on the Prut river in the southern Ukraine.

US flight nurses arrive in southern France and begin air evacuation of casualties to Italy.

1945
U.S. War Office estimates that there are a quarter of a million POW’s and civilian internees in Japanese hands at present.

Soviet troops land at Port Arthur and Dairen on the Kwantung Peninsula in China.

MacArthur says the surrender will be signed in the Tokyo area on the 31st August.

In Manchuria, Japanese surrender to Soviets, and the Soviets seize Port Arthur.