Bad weather and a reorganization of fighter strength by the Luftwaffe causes a lull in operations.

1941
German submarines sink a Norwegian and 3 British ships from the Convoy OG-71 of 22 ships and 9 escorts in the Atlantic Ocean.

South of Lake Illmen, the Soviet 38th Army is close to outflanking the German 10th Corps, but the German 56th Panzer Corps counterattacks the Soviets and rolls through their positions.

A brigade of the 9th Australian Division which is besieged at Tobruk is relieved by sea, as Polish reinforcements arrive. 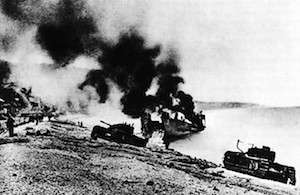 Operation ‘Jubilee’, some 6,100 British and Canadian troops conduct a raid-in-force against the port of Dieppe, which ends in disaster. In less than 10 hours of battle, the British and Canadian forces lose 1,380 KIA, 1,600 wounded, 2,000 made prisoner. The RAF loses 107 aircraft and the Royal Navy lose a destroyer. Germans loses are 345 dead or missing and 268 wounded, with total Luftwaffe losses being just 40 aircraft. Civilian casualties are put at 48 dead and 100 wounded.

General Paulus’s 6th Army begins an attack to take Stalingrad itself, although he had still not been joined by Hoth’s 4th Panzer Army.

Auchinleck announces the capture of 10,000 Axis troops in last two months of fighting in North Africa.

Japanese send 4 transport ships with an close escort of a cruiser and 4 destroyers to strengthen their land forces on Guadalcanal, Solomon Is. Movement is covered by 3 carriers, 2 battleships, 5 cruisers and 17 destroyers.

1944
In an effort to prevent a communist uprising in Paris, Charles DeGualle begins attacking German forces all around the city.

The Falaise pocket is now just seven miles by six. The Germans forces are ordered to break out during the night across the Dives. Patton’s armor reaches the Seine at Nantes and makes the first crossing 30 miles North West of Paris. The Germans are granted a truce in Paris to withdraw troops. (WATCH BRITISH NEWSREEL)

1945
The Japanese forces in South China surrender to the Chinese 1st Army in Canton. The Russian Far Eastern Army captures Harbin and Mukden in Manchuria.

16 Japanese surrender envoys arrive on Ie and are taken to Manila for a 5 and a half hour discussion with MacArthur and his staff. Japanese troops on Java receive the cease-fire order.