1940
Although ‘Eagle Day’ was the 13th August, due to poor results, Goering decides that the 15th August with instead be known as ‘Eagle Day’. The Luftwaffe launches its greatest attacks so far against the RAF’s airfields, involving more than 1,000 German planes and 1,786 sorties. The Luftwaffe lost 76 aircraft, although these were mainly from Luftflotte 5 which made diversionary attacks from Norway, while the RAF lost 35 fighters and its airfields suffered heavy damage. Twenty German JU88 aircraft from Denmark attack Driffield, Yorkshire, destroying ten Whitley aircraft on the ground.

1942
The first foreign newspaper since the Revolution appears in Russia. Units of Army Group A reach the foothills of the Caucasus.

The last of 6 remaining merchant of the Pedestal convoy, the tanker Ohio, with 10,000 tons oil on board is towed into Malta by three British warships.

The Japanese submarine I-25 departs Japan with a floatplane in its hold which will be assembled upon arriving off the West Coast of the United States, and used to bomb U.S. forests.

Portsmouth has heaviest raid for two years when its bombed by 91 German planes.

The United States ships 60,000 alarm clocks to Britain, to be distributed to workers in war productionÂ plants to improve on-time performance.

The Swedish government forbids all German traffic and transport from crossing over it’s territory.

Argentan-Falaise gap, but start to pull out as Anglo-Canadian troops resume the attack to the North. Adolf

Hitler describes this as ‘The worst day of my life’.

Kluge’s staff car is strafed. He is replaced by Model who retreats to the Seine. 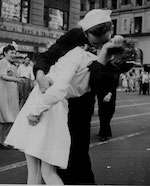 Gasoline and fuel oil rationing ends in the United States.

VJ-Day is declared in Britain and huge crowds cheer King and Queen en route to Westminster for the State opening of Parliament. The British release details of one of most closely guarded secrets of war, RADAR.

The Japanese Government resigns and the war minister commits suicide. MacArthur becomes the Supreme Commander for Allied Powers in the Pacific.