Ministry of Home Security announces that parachutes had been found in Derbyshire, Yorkshire and Scotland, but no evidence of Germans discovered. 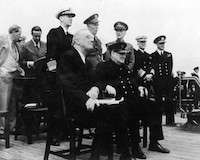 President Roosevelt announces US will not allow U-boats to attack British shipping in western hemisphere.

Franciscan priest Maximilian Kolbe volunteers to be executed in place of a condemned man at Auschwitz; he will be canonized.

1942
German forces cross the upper Kuban river at Krasnodar in the Caucasus.

Dwight D. Eisenhower is named the Anglo-American commander for Operation Torch, the invasion of North Africa.

1943
The Eighth Army is now only 29 miles from Messina. Italy declares Rome to be an open city by Italians.

The U.S. government sets aside 10 million barrels of beer, a sixth of the the nation’s production, for use

by the military. This gives the armed services enough beer for each soldier to have a bottle a day, except on Sunday.

1944
Roosevelt and Churchill meet at Quebec where they initial the Morgenthau Plan that calls for the divisionÂ of post-war Germany and its transformation into a purely agricultural country.

Monty launches Operation ‘Tractable’ towards Falaise with a carpet bombing by 800 planes.

The Russians begin an offensive from their Vistula bridgeheads, 100 miles to the South of Warsaw.

1945
Chiang Kai-shek’s representatives sign a treaty of alliance with the Russians.

USAAF B29’s launch the last air raid of the war against Kumagaya.

The US government orders resumption of civilian car manufacturing.