1940
Roosevelt agrees to supply 50 First World War destroyers to Britain in return for the lease of naval bases in the Caribbean. Colonel E.L.M. Burns proposes developing a Canadian parachute force. The idea is rejected by the Director of Military Operations in headquarters. 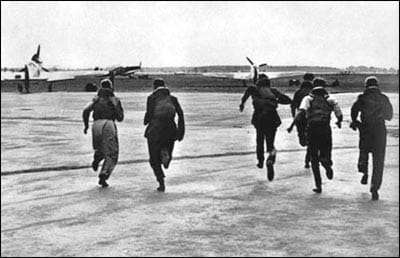 ‘Eagle Day’, the first day of the maximum offensive by the Luftwaffe to destroy RAF airfields and gain air supremacy over England in preparation of Operation Sea Lion. The Luftwaffe launches 1,485 sorties, but because of confusion and delays, the main attacks were not mounted until the afternoon. Some airfields were attacked, but not the primary fighter bases. Luftwaffe losses were heavy with 39 aircraft being lost (mainly Ju-87 Stuka’s), while the RAF lost just 15 aircraft. Twelve RAF Blenheim bombers attack Hemsteds airfield in Holland. Only one plane returns.

An air crash in Canberra kills three UAP ministers and Chief of the Australian General Staff.

1945
The Mongolian People’s Republic declares a Holy War against the Japanese.

Surrender documents are sent to MacArthur in Philippines.

Lt. Oscar Perdomo of US 507th Fighter Group becomes the last air ace of the war when he shoots down 5 Japanese fighters over Kyushu.