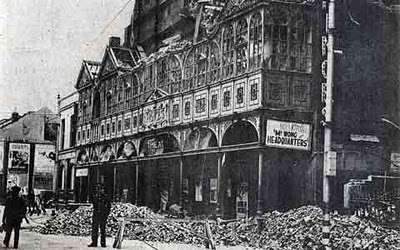 The Luftwaffe attacks Portsmouth, Isle of Wight and all along Kent and Sussex coast. They also attack forward RAF airfields and radar stations in preparation for ‘Eagle Day’. British claims are high as they report 62 Luftwaffe planes shot down against the RAF’s 13, while in reality it was just 26 Luftwaffe and 22 RAF planes lost.

The Dortmund-Ems canal in Germany is blocked by low flying British bomber, the pilot is later awarded VC.

1941
The draft extension passes in the House by only one vote.

US Navy takes over patrolling convoy routes in the North Atlantic and tracking German submarines for the Royal Navy in violation of Neutrality Act.

Churchill and Roosevelt sign the Atlantic Charter an eight-point declaration of peace aims.

Hitler issues Directive No.34 which temporarily abandons Moscow as an objective in favour of the Ukraine.

1942
Himmler is made responsible for order in Belgium, Holland, Denmark and Norway.

In their advance south toward the Grozny oilfields, units of Army Group A capture Elista near the Caspian Sea.

Churchill arrives in Moscow for talks with Sralin. During 4 days of often acrimonious talks, Stalin was eventually forced to accept that there would be no ‘second front’ during 1942.

1943
The Heaviest RAF attack so far on northern Italy, with more than 1,000 tons dropped on Milan in under 30 minutes.

1944
Lt. Joseph P. Kennedy Jr. (brother of the future president) is killed in a top-secret Aphrodite mission from England, in which planes loaded with bombs are guided by remote control to the target after the pilots bail out.

First PLUTO (Pipeline under the Ocean) becomes operational, taking fuel from Isle of Wight to Cherbourg.