The Lodz Ghetto in occupied Poland is sealed off from the outside world with 230,000 Jews locked inside.

All of Greece is under German and Italian occupation. During the campaign, the Greeks lose 15,700 killed and 300,000 prisoners. The British lose 2,000 killed and 10,000 made prisoner, while the Germans only suffer about 2,000 killed and missing.

The Afrika Korps second attempt to capture Tobruk is again repulsed by the Australians.

1942
Hitler and Mussolini meet at Berchtesgaden to discuss future axis strategy in North Africa and the Mediterranean, the main objectives being the reduction of Malta and the seizure of the Suez Canal.

Hitler and Mussolini agree that the capture of Malta (Operation Herakles) should take place on the 10th July 1942.

The British 1st Burma Corps completes its withdrawal over the Irrawaddy at Mandalay in Burma.

The US aircraft carriers, Hornet and Enterprise set sail from Pearl Harbor for the Corel Sea under the command of Admiral William ‘Bull’ Halsey.

1943
The British submarine HMS Seraph drops ‘the man who never was,’ a dead man the British planted with false invasion plans, into the Mediterranean off the coast of Spain. The ‘man who never was’ pulled off one of the greatest deceptions in military history–after his death. 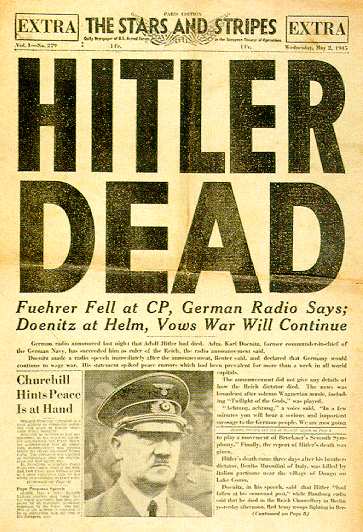 The U.S. Third Army liberates 110,000 POW’s in the Moosburg area, Northeast of Munich. The U.S. Seventh Army clears Munich and the French takes Friedrichshafen and cross into Austria. The U.S. First Army meet the Russians at Ellenburg, South of Berlin. The British Second Army liberates 20,000 prisoners (two third POW’s and one third political prisoners) from Sandbostel camp in northern Germany.

With the Red Army only a few hundred yards away, Hitler commits suicide with Eva Braun in the Reich Chancellery bunker at 1530hrs and their bodies immediately incinerated with gasoline by SS bodyguards

A Sergeant of the Russian Army plant the Red Flag on top of the Reichstag building at 2.30 pm. As the final Russian assault on Tiergarten begins, Goebbels and Bormann send General Krebs, Chief of the General Staff to the headquarters of Marshal Zhukov with a permit to make an armistice, but Zhukov refuses and demands an unconditional surrender. Troops of the 4th Ukrainian front capture Moravska Ostrava. Fighting continues in Breslau, as the German garrison refuses to surrender.

The U.S. Fifth Army in Northwest Italy, links up with French troops on the French/Italian border.

The Mexican Air Force’s 201 Squadron arrives at Manila. In operations from 4 June, 1945 to the end of the war, the 201 flies 96 combat missions, mostly in support of ground troops. The 201 will be the only Mexican unit to see overseas combat in the country’s history.