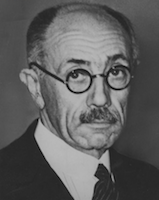 1942
Japanese aircraft bomb Mandalay in central Burma, killing 2,000. They met no opposition from the RAF as all its aircraft had by now been withdrawn to India.

The final Japanese offensive on Bataan begins with a five hour artillery and air bombardment, after which the Japanese launch infantry attacks supported byÂ some tanks, which allows them to make penetrations in to US-Filipino defensive positions.

United States Navy Task Force 39 arrives at Scapa Flow to cover the Murmansk and Mediterranean runs, the first unit of the US Atlantic Fleet in British waters.

1945
The British Second Army reaches Munster; the U.S. Ninth Army captures Recklinghausen in the Ruhr, while the US First Army takes Fulda and Kassel.

The Austrian resistance leader Major Szokoll and Russian military authorities confer about co-operation on the Russian offensive against Vienna.

MacArthur is appointed as C-in-C of land forces in the Pacific.

Admiral Nimitz is appointed as C-in-C of all naval forces in the Pacific.