1941
The British evacuation of Greece is completed

A clampdown is made in Norway against degenerate literature, with large-scale book burnings being held.

1942
Coastal “dimouts” go into effect along a fifteen-mile strip on the Eastern Seaboard, in response to German U-boat activity of the U.S. Atlantic coast.

At what turns out to be its last meeting, the puppet Nazi Reichstag passes legislation proclaiming Hitler “Supreme Judge of the German People,” formalising the Fuhrer’s position as being above the reach of the law. 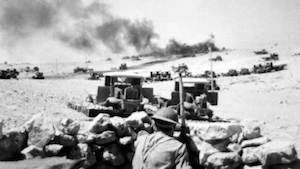 1944
The South African and Rhodesian Prime Ministers arrive for the imperial Conference.

The Canadian First Army captures Emden and Wilhelmshaven, while the U.S. Seventh Army takes Augsburg and reaches the Austrian border to the South. Hitler marries his mistress, Eva Braun, and dictates his political testament in which he justifies the political and military actions of his 12-year-rule, blaming the war on international Jewry and exhorting the German people even after defeat to adhere to the principles of National Socialism, especially its racial laws. Grossadmiral D0nitz is appointed as his successor.

Italian Partisans capture Mussolini, his mistress Clara Petacci and 12 of his cabinet members in a German convoy trying to reach Switzerland. All are shot in nearby village.

Russian forces are fighting in the Wilhelmstrasse and reach the Anhalt Station which is just half a mile of the Fuhrerbunker.

1946
The Allies indict Tojo with 55 counts of war crimes.