1940
The British stun the French and Norwegians by deciding to evacuate southern Norway. 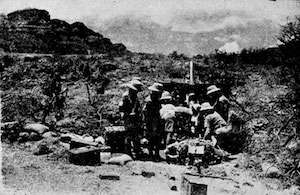 The Italian fortress of Dessie, south of Amba Alagi is captured by South African forces.

Cunningham is forced to order the withdrawal of the 10th Submarine Flotilla from Malta as a result of the intense bombing and because of the mines laid by aircraft and German E-boats.

Japanese fighters attack their first B-29, one fighter is shot down.

The Army seizes a Montgomery Ward plant in Chicago and reopens it for war production after its board of directors refuses to negotiate with the CIO labor union. Chairman Sewell Avery refuses to leave his office, and still seated in his chair, is carried out to the parking lot, where he bows to workers and enters a waiting limousine.

1945
The first of some 75,000 ex-prisoners of war are flown back to the UK by aircraft of Bomber Command.

German troops at Bremen surrender to the British and Canadians. Allied troops now line the Swiss border from Basle to Lake Constance. The U.S. Third Army takes Regensburg on the Danube. Goering’s fall from grace announced in Germany, General Ritter von Greim is to replace him.

The 2nd Belorussian front captures Stettin on the river Oder, while the 3rd Belorussian Front captures the Baltic port of Pillau, 20 miles West of KÃ¶nigsberg. General Wenck embarks on the last German offensive to relieve Berlin, but only manages to reach Ferch on the 27th April, before the offensive grinds to a halt. The remnants of 9th Army are cut off and surrounded in the Halbe pocket 30 miles southwest of Frankfurt am der Oder. The 2nd Ukrainian Front captures Brno, in Czechoslovakia.