New evacuation scheme introduced in Britain as a Ministry of Health survey shows that only 8% of eligible children have been registered; 19% of parents refused to do so; 73% did not bother to reply.

1941
Roosevelt announces an indefinite extension of US Atlantic patrols.

German paratroops seize Corinth and cross the Corinth Canal to the Peloponnese.

Hitler issues Directive No.28, ordering the preparation of plans to capture Crete. The basic plan is to involve 22,750 paratroops, 650 combat aircraft and is to be launched on the 18th May 1941, although this is put back to the 20th May 1941.

1942
The Luftwaffe attack Bath as the ‘Baedeker’ raids continue.

On his last patrol aboard U-404, Kapitanleutnant Otto von Bulow fires two FAT and two G7e torpedoes at British aircraft carrier HMS Biter. All detonate prematurely and HMS Biter escapes without damage. Von Bulow is later decorated by Hitler with Oak leaves to his Knights Cross for his Atlantic successes and German newspapers report the recent sinking of the American carrier USS Ranger as well. Later, USS Ranger commander Gordon Rowe, is photographed aboard his carrier smiling at a photograph of von Bulow and the German report of his vessel’s demise. 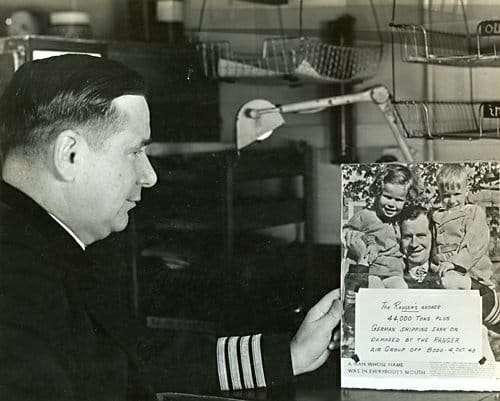 1944
With Allied control of the skies over Germany now virtually complete, Goebbels strongly objects to Hitler’s plan to fly to Berlin for one of his rare visits to attend Colonel General Hube’s funeral. Hitler insists on going anyway. It will be the last time the increasingly reclusive Fuhrer will show himself at a large public gathering in the Third Reich.

1945
Beginning of the San Francisco Conference convened to discuss the founding of the United Nations.

The RAF attacks the ‘Eagle’s Nest’, Hitler’s chalet and the SS barracks at Berchtesgarten.

Troops of the U.S. Ninth Army and the Soviet 1st Ukrainian Front meet on the Elbe at Torgau, 100 miles Southwest of Berlin.

The U.S. Fifth Army enters Mantua, 60 miles Northwest of Bologna and continues its drive up coast, while the British Eighth Army crosses the Po river and captures Parma.

Russian units of the 1st Belorussian and 1st Ukrainian Fronts meet at Kietzen west of Berlin, meaning that eight Russian armies have now surrounded Berlin in a vice like grip. The suburbs Tegel and Reinickendorf fall into Russian hands. A relief attack by the III Panzer Korps from the area of Eberswalde 50 miles northeast of Berlin fails.

U.S. Marines seize islands off coast of Okinawa in Pacific.