Norwegian troops attack the Germans south of Narvik, but are beaten back. 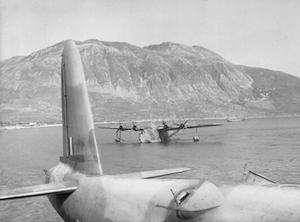 German forces in Greece break through British positions at Thermopylae and land paratroops on Greek islands in the north-eastern Aegean. The British expeditionary force begins the evacuation of its troops to Egypt and Crete.

1942
The Luftwaffe raids Exeter in the first of Hitler’s retaliatory raids, which were soon to become known as the ‘Baedeker’ raids after the famous guidebook series of that name. A second raid employing 91 aircraft is made against Rostok.

US Marine Corps raises maximum age for recruits from 33 to 36.

1944
All overseas travel is banned in Britain.

The first B-29 arrives in China, over the Hump of the Himalayas.

The British force the road to Kohima open.

The US Seventh Army crosses the Danube at Dillingen and captures Ulm.

The Eighth Army captures Ferrara, 30 miles to the Northeast of Bologna and crosses the Po after fierce fighting. The U.S. Fifth Army takes Spezia on the Gulf of Genoa and Modern.