1941
King George II of Greece and his government are flown to Crete by the RAF.

The German build up for Operation ‘Barbarossa’ continues with 59 divisions now deployed along the border with the Soviet Union.

1942
In a secret session of the House of Commons, Churchill delivers a speech declaring that the liberation of Europe was ‘the main war plan’ of Britain and the USA.

Churchill tells the House of Commons of disasters in Japanese war.

The RAF raids Rostok with 142 aircraft.

1944
The last Japanese attack on Garrison Hill, Kohima is repulsed as the British ‘left hook’ begins its advance to the North. 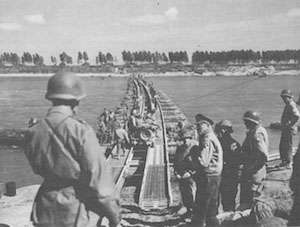 Dessau is reported as clear of German troops. The British Second Army reaches Harburg across the Elbe from Hamburg. Frankfurt is captured. Goring telegraphs Hitler saying that he will take over command as Hitler’s Deputy. Hitler says he must resign all his posts and orders Goring’s arrest. Reichsfuhrer-SS Himmler begins secret negotiations for a separate peace in the West with Count Bernadotte, head of the Swedish Red Cross.

The U.S. Fifth and British Eighth Armies reach the Po, to the North of Bologna.