1942
Fuhrer Directive 41 rolls off the mimeograph machines in Rastenberg and the Wehrmacht has its marching orders for 1942. Leningrad is to finally be captured, but that’s a secondary objective. The big plan is in the South, which involves 2nd Army and 4th Panzer Army breaking through to Voronezh on the Don. 6th Army will break out South of Kharkov and combine with the 4th Panzer Army to surround the enemy. After that, the 4th Panzer Army and 6th Army will drive East under the command of Army Group B and surround Stalingrad from the North, while Army Group A’s 17th Army and 1st Panzer Army will do so from the South. Once Stalingrad is taken, the 6th Army will hold the flank defense line while Army Group A drive South into the Caucasus to seize the oilfields and become the northern punch of a grand pincer movement (the southern half being Rommel) the seize Suez, the Nile Delta, the Middle-East and its oilfields. 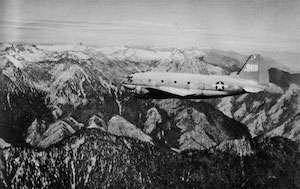 US Tenth Air Force begins regular air supply service over the “Hump” between India and China and begins evacuating 4500 personnel from Burma to India.

1943
The British First and Eighth Army’s, the U.S. 2nd Corps and Free French forces begin the final offensive to destroy the axis bridgehead in Tunisia.

Japan announces captured Allied pilots will be given “one way tickets to hell.”

The Russians say their talks with Finns are over.

An increasingly depressed and dispirited Mussolini arrives at Klessheim Castle near Salzburg for one of his last meetings with Hitler. The Fuhrer warns that the Allied invasion can be expected within “6 to 8 weeks,” at which time he would unleash “new technical weapons” that would turn London in a “heap of ruins.” The Duce leaves unconvinced.

The allies land unopposed at Hollandia, on the northern coast of New Guinea.

1945
The U.S. First and Ninth Armies clear all German resistance in the Harz Mountains, 40 miles Southwest of Magdeburg. The U.S. Seventh Army captures a bridge across the Danube. The British Second Army is fighting in the outskirts of Bremen. The U.S. Third Army starts its drive down the Danube valley as the French First Army reaches Lake Constance on the Swiss/ German border. Hitler, ignoring the pleas of his entourage, decides to stay in his bunker at Berlin to await the inevitable end.