1889
Adolf Hitler, the Nazi dictator of Germany who led his country into World War II and was responsible for persecuting millions of Jews, was born. 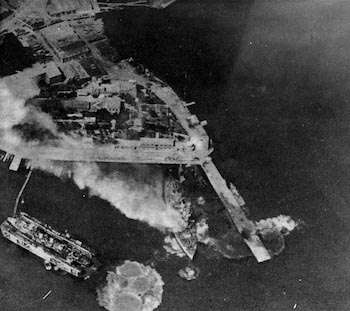 Luftwaffe launches raid on Athens and Piraeus, sinking five ships—heavy raids will continue for next three days. Riot between Sikhs and Muslims in Bombay, India leads to 400 casualties.

1942
An assassination attempt on Doriol, head of the French Fascists fails. Pierre Laval, the premier of Vichy France, in a radio broadcast, establishes a policy of “true reconciliation with Germany.”

In a reprisal for Resistance sabotage of German troop trains, the Germans execute thirty French hostages at Rouen. The next day, twenty more hostages are killed at St. Nazaire.

Adolf Hitler plans the German summer offensive, but the first priority is to remove the Barvenkovo salient in the Ukraine, which is gives the Russian a springboard to retake Kharkov, or turn South and retake the Ukraine. General Friedrich Paulus, a tall, ascetic Prussian staff officer, draws up the plans for an panzer offensive to pinch out this salient. Amazingly, the Russian are simultaneously planning their own offensive out of the salient.

The US aircraft-carrier Wasp delivers 46 Spitfires to Malta as reinforcement, although such is the intensity of the axis air onslaught (9,599 sorties in April), that almost all these aircraft had been destroyed on the ground within 3 days.

As a result of the Doolittle raid on Japan, the Japanese decide that Operation ‘Mi’ must take place as soon as possible, while plans to capture Samoa, Fiji and New Caledonia are to be postponed.

1943
The limited recruitment of women into the Home Guard is announced in Britain.

The Jewish uprising in Warsaw triggers a massive German response and initiates a month long massacre of the 60,000 Jews in the ghetto.

The Americans announce that their airmen captured in the ‘Doolittle Raid’ on Tokyo were beheaded by Japanese.

1944
Colonel General Hans V. Hube, whose hard-charging aggressiveness on the Eastern Front had made him one of Hitler’s favorites, is killed when his plane crashes on takeoff from Berchtesgaden on the return trip to his command after offering the Fuhrer birthday greetings. Grief-stricken at losing such an outstanding commander, Hitler orders a state funeral for Hube in the Reich Chancellery in Berlin.

1945
The British Home Secretary says that 60,585 British civilians have died and 86,175 have been seriously injured in air attacks since outbreak of war.

The U.S. Fifth Army reaches the Po river Plain in northern Italy as a German retreat to river ordered.

Russian artillery begins to shell Berlin. The Germans desperately counterattack both North and South of Frankfurt an der Oder. A Furious battles takes place at Sternbeck and Protzel.

In Czechoslovakia the Russian pressure increases at Moravska-Ostrava and Brno.