1940
Hitler gives orders that the invasion of Denmark and Norway is to begin on the 9th April 1940.

1941
The 5th Light Division recaptures Agedabia from the British and fans out into three columns, two of which race across the desert in an attempt to cut off the retreating British, while the third pushes up the coast road towards Benghazi. Rear Admiral Bonnetti, the commander of the Italian Red Sea Flotilla orders his seven destroyers out on ‘do or die’ missions. All the destroyers are sunk or captured without achieving any worthwhile results. 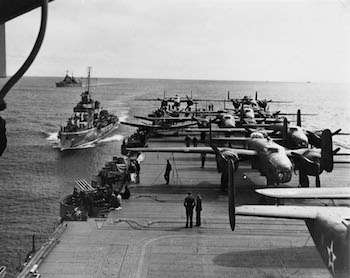 Axis air forces begin a bombing campaign against La Valetta, the British naval base on Malta.

In the United States, tin tubes for toothpaste & shaving cream must be turned in to buy new tube; restrictions placed on use of tin in consumer packaging.

1944
The Russians announce their entry into Romania and threaten to shoot one third of all German POWs if the 18 divisions of the trapped 1st Panzer Army do not surrender. The Russian army crosses the river Prut, East of Cernovcy and liberates the little city Gerca.

The US Tenth Army crosses Okinawa, dividing the island.

On Okinawa,  United States opens Yontan and Kadena airfields for emergency and reconnaissance use.