1940
‘State of Siege’ is extended to the whole of Netherlands.

The first clash between British and German troops in Norway, at Verdal north of Trondheim

British women ages 20-30 are conscripted for war work; mothers of children under 14 are exempt.

A Brigade from the British 10th Indian Division land at Basra in southern Iraq.

The Germans attack south through Greece on a wide front. The Greek Government agrees that British forces should be evacuated. General Wilson plans to make a strong stand at Thermopylae, to cover the withdrawal of his troops to ports in the Peloponnese.

1942
Resistance on Cebu Island ends as the US-Filipino garrison surrenders to the Japanese.

1943
During World War II, tens of thousands of Jews living in the Warsaw Ghetto began a valiant but futile battle against Nazi forces.

1945
The British Second Army reaches the Elbe and launches an attack on Bremen. The U.S. First Army captures Leipzig and Halle, 50 miles South of Magdeburg. On the eve of Hitler’s 56th birthday, Dr. Goebbels exhorts the nation and predicts that in spite of all misfortunes Germany will yet prevail, that the “perverse coalition between Bolshevism and Plutocracy” is about to break up, and that it is Adolf Hitler (“Our Hitler!”) who will still turn back the tide and save Europe, as he has thus far, from falling into the clutches of the Kremlin.

The 1st Belorussian Front finally breaks through the German defenses on the Seelow heights, despite heavy losses in men and tanks (over 400 in two days) and races towards Berlin. 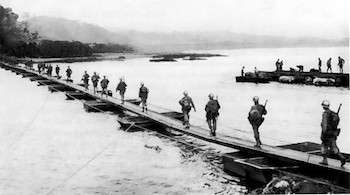