1940
Royal Navy Heavy cruiser “Suffolk” bombards installations at Stavanger, but on her return is badly damaged by Ju-88 bombers and barely makes Scapa Flow with her stern awash.

1941
Yugoslavia surrenders, with the Wehrmacht taking 334,000 prisoners. King Peter of Yugoslavia is flown to Athens and then on to London by the RAF.

1942
The RAF makes a daylight raid against Augsburg in southern Germany with 14 Lancaster bombers. The raid is pressed home with great gallantry, with squadron leader J.D. Nettleton being awarded the VC. However, 7 aircraft are lost, which convinces Air Marshal Harris that daylight raids by heavy bombers were too costly.

The U.S. War Manpower Commission orders 27 million workers in industries deemed essential to the war effort not to leave their positions for any reason.

1944
Amid rumors in the allied press that he is dead or is locked in an insane asylum, Hitler appears, but does not speak at the funeral in Munich of Gauleiter Adolf Wagner. It is the first time Hitler has shown himself publicly since his speech to the “Old Fighters” the previous November.

1945
The battle for Berlin escalates a breakthrough is made by the 1st Ukrainian front. However, the 1st 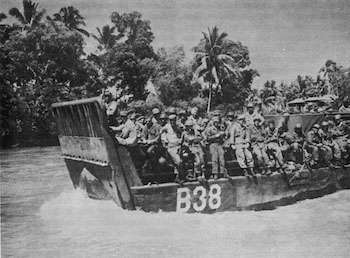 Belorussian Fronts offensive against Berlin is stalled by tenacious German resistance on the Seelow Heights, 2 miles West of the Oder, with great losses of troops and tanks for the Russians. The situation for the German 6th SS Panzer Army in Austria is now critical at St.Polten. The Russians occupies Wilhelmsburg.

The US Eighth Army lands on Mindanao in the Philippines.