British troops are landed in the Faeroe Islands. 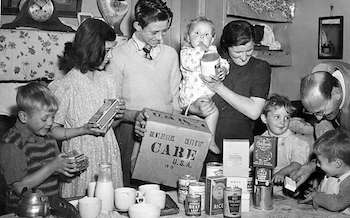 London suffers through the heaviest blitz of the war. Parliament buildings and St. Paul’s Cathedral suffer damage, and more than 2,250 fires are touched off by incendiary bombs.

British destroyers sink all eight ships in an Axis convoy off Tunisia; 1800 killed.

1942
An official inquiry into British bombing policy is setup under Mr. Justice Singleton. This was the result of a debate between Churchill’s two top scientific advisors, Lord Cherwell and Sir Henry Tizard. Cherwell, supported by the Air Ministry, drew up a list of 58 German cities and towns whose destruction would knock Germany out of the war. Tizard argued that less emphasis should be put on the bombing of Germany and more on using the aircraft in the Battle of the Atlantic.

Japanese Imperial GHQ Naval Order No.18 is issued. This orders Admiral Yamamoto, C-in-C of the Japanese Combined Fleet to draw up plans for Operation ‘Mi’, the capture of Midway and the Aleutian Island, a plan that had originally been suggested by Admiral Yamamoto during March. The Japanese make landings on Panay Island. The US aircraft carrier Lexington, sets sail from Pearl Harbor, with orders to link up with the Yorktown in the Tonga Islands and then head, under the command of Admiral Fletcher to the Coral Sea.

1944
Yalta in the Crimea is captured by the Russians.

The battleship USS Wisconsin (BB-64), is commissioned at Philadelphia, Pennsylvania.

Three Japanese blow up a 300ft suspension bridge on the Silchar track.

1945
In northern Holland the Canadians take Harlingen, 50 miles Northeast of Amsterdam and occupies Leeuwarden and Groningen. The US First Army captures Solingen and Wuppertal.

The US 7th Army reaches Nuremburg.

Hitler issues the last Order of the Day to the Eastern Front, saying ‘He who gives orders to retreat . . . is to be shot on the spot’ as the 1st Belorussian Front and the 1st Ukrainian Front start the final offensive on Berlin from along the Oder-Neisse line.

Off the Hela peninsula in the Baltic, the German liner Goya is torpedoed by a Russian submarine, killing 6,500 wounded soldiers and refugees.

The British take Taungup in Southwest Burma, thereby depriving the Japanese of their last coastal supply base.