British and French troops land at Namsos near Narvik to assist Norwegians against German invasion.

1941
Germans break through the new Greek frontline. The Greek Army of Epirus withdraws from Albania.

Kaiser shipyards in Richmond, California lay keel for its first liberty ship, the Ocean Vanguard; 747 ships will be built in Richmond. 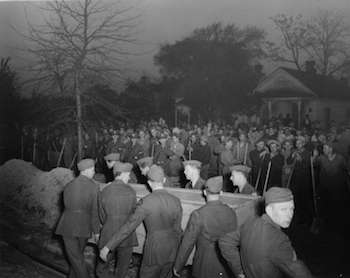 Laval returns to power in Vichy as the ‘Chief of Government with special powers’. Thirty five hostages shot in Paris.

Off North Carolina, destroyer USS Roper sinks U-85 in first US naval victory over a German U-boat, all 46 on board killed.

1943
Stalin’s son, Yakov Dzhugashvili, dies as a prisoner of war of the Germans.

The Russian 14th Army repulses a German attack to the Southeast of Leningrad.

1944
First transports of Jews from Athens to Auschwitz, totaling 5,200 persons.

US Fifth Army launches final offensive in Italy, toward the Po Valley.

Glider troops capture the ex-German Chancellor von Papen at a hunting-lodge near Stockhausen along with three generals.

The French launch a final assault on the trapped German garrison at Bordeaux.

The British Second Army reaches the outskirts of Bremen, while the US Third Army captures Gera and Bayreuth.

The Canadian First Army assumes military control of the Netherlands where German forces are now trapped in the Atlantic wall fortifications along the coastline.